Jennifer Lopez Spotted With Robin Thicke – Are They Hooking Up? – Paula Patton Freaks 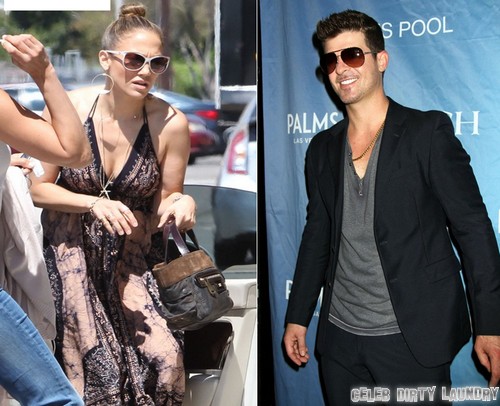 More and more, I’m starting to think that Robin Thicke and Paula Patton actually do have an open marriage. Sure, it’s been rumored for a long time, and after the incident with the butt-grabbing and rumor mongering, I can’t help but think that neither of them particularly care about each others’ sexual exploits. Why else would Paula be ok with Robin hanging out with Jennifer Lopez, just days after he was accused of cheating on her with a fan, and there’s photographic proof to the fact?

To be fair, Jennifer and Robin were only spotted together in a recording studio, and they look like they’re working on a collaboration – not hooking up or flirting. But after what happened, why would Paula ever trust him?

See – open marriage. Or even if it’s not an open marriage, maybe she doesn’t care. Being Robin Thicke’s wife has gotten her tremendous opportunities and I have a feeling that it was what launched her film career. She was struggling for a long time but as he got more popular, she was able to land a great agent and book more roles. She’s decently talented and she definitely did well in all of her roles, but is she good enough to have beat out hundreds of other actresses who are more talented? Probably not.

Connections mean everything in this business, and her husband has all the connections – no matter how skeevy he may be. Honestly, I still think she has something to worry about with Jennifer – if she does worry – because J.Lo seems like she’s over Casper Smart, and it’s only a matter of time before she moves on.

What do you guys think? Is this a possibility, or is just projecting? Let us know your thoughts in the comments.