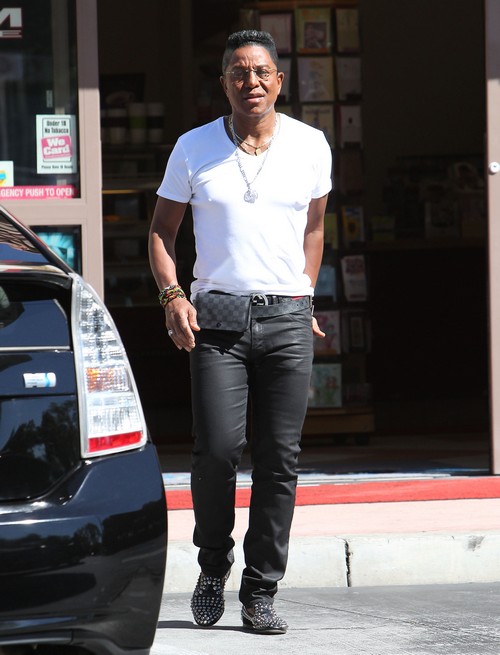 Jermaine Jackson is one of the more distasteful members of the Jackson family, and he proves that once again with this latest story. According to a new report from TMZ, Jermaine bought a $160,000 2009 Ferrari – while he was BEHIND on his child support. The idiot didn’t think about giving the money to his child or the mother of his child, Alejandra Jackson, and decided to spend it on a Ferrari instead. Of course the government isn’t going to allow that.

According to the report, Alejandra has had many problems getting the child support from Jermaine in the past, but I think we’ve seen enough from the Jacksons to know how cheap they are, and how unwilling they are to part from any pile of cash – ever. Anyway, after Jermaine reportedly fell behind on his payments, the government stepped in and garnished his wages. For those who don’t know, ‘garnishing’ is basically a last ditch effort to collect debt, and that usually results in the government seizing parts of your income.

Again, if he has the money to buy a freaking Ferrari, he has the money to pay child support. It’s not even like he’s being expected to give a massive amount – just $3000 a month. And he was just $750 past due, but that’s a huge deal to a single mother raising a child by herself. Obviously, it doesn’t mean anything to Jermaine because he dropped more than a $50k on a car when he couldn’t even be bothered to spend $750 on his own child.

You know who else is unhappy with Jermaine’s decisions? His mother, Katherine Jackson. Katherine is reportedly furious at Jermaine for spending so much cash when he was so behind on his personal bills. But then again, she’s the only semi-sane member of that family, and coming from Jermaine, this actually isn’t all that surprising.

What do you guys think? Do you think Jermaine forgot [which is still a douchebag move], or do you think he purposefully didn’t send the correct amount? Let us know your thoughts in the comments.