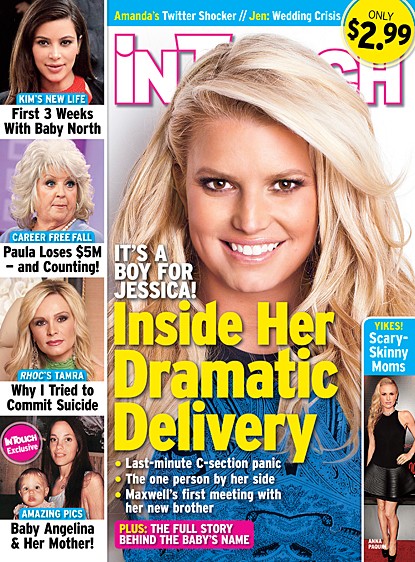 Did you forget Jessica Simpson was pregnant or that she just had her little boy? The In Touch cover this week almost seems like a pity invite. What with Kim Kardashian’s miracle baby and Kate Middleton’s soon to be heir it’s hard to believe Jessica scored a front and center on a tabloid. But it was dramatic! She had another (scheduled) c-section! Jessica Simpson’s pregnancy was difficult! So I suppose she was cover worthy. It seems no one can have normal, natural non-famewhorey births anymore. Everything has to be so dire, so intense. I thought the old-fashioned way was intense enough. God damn these celebrities for upping the ante with their attention-loving vaginas.

Do we have to talk about the name? Ugh. I can’t tell you how much I hate Ace Knute Johnson (the name, I don’t hate the baby yet). It’s not North West kind of hatred but it’s up there. Here’s the deal. Most of the time I could give a shit what anyone names their kid. It’s not my kid so what do I care? But it always bites me in the ass when people choose unusual names just to be different like it in some way makes their kid special. My husband and I thought relatively long and hard about a baby name and I was surprised by how conventional I took it. But here’s my philosophy: if my kid is going to be interesting or different or cool or a total dumb ass freeloader then it’s because of what he does – not his name. I’d prefer to have my kid’s actions speak for him rather than the projection I labeled him with nice and early. It doesn’t seem like this is what Jessica and Eric Johnson are thinking. They want their kid to be different. In fact, they value his different-ness. God damn how draining is that for a kid? Not every newborn has to be Michael Cera or Tim Tebow reincarnated. Then again, it’s not like Jessica Simpson’s baby is going to grow up to be a lawyer. All those Mensa-genes will just go to waste I guess.

Will you catch the new In Touch to read up on the Jessica Simpson delivery? Might as well while you’re waiting for Kate to deliver little Prince Philip!