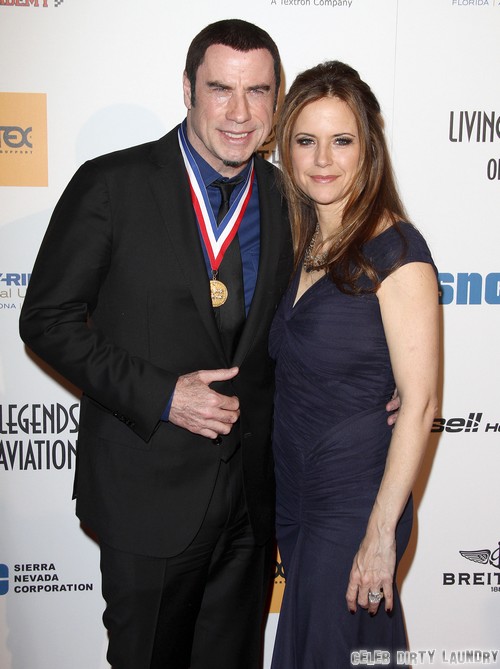 It must really suck to be John Travolta’s beard. I have to say part of me hopes that all of those divorce rumors about Kelly Preston being fed up with dealing with John’s garbage are true. We haven’t heard much from her in a few years, as Kelly opted to spend some time focused on her children but now she’s back. She has been cast in an ABC pilot called Keep Calm and Karey On and I have to guess that getting back to work was probably a great distraction for Kelly. At least until the second day of filming.

According to the May 27th print edition of Star Magazine, on the second day on set John decided to pay his wife a visit. The series creator, Andrea Abbate is also a Scientologist and so John stormed in disrupting everything to give her a huge hug. His intrusion went from a quick visit to a total disruption and the cast and crew were furious. Apparently they felt like they were lost the land of crazy cults and it left a really bad taste in the non-believer’s mouths.

Kelly is trying to stay neutral because already she feels like the project is destined to fail because of all the discomfort on set. Supposedly cast and crew members feel like they have ended up on board a project intended to promote Scientology and they’re none too happy about it. As for Kelly, she must be pissed. Her husband has destroyed their marriage with his chronic gay play dates and now that she finally went back to work he is sabotaging that as well.

Do you think Keep Calm and Karey On will ever actually land in ABC’s lineup or is the deck already stacked against it? What about Kelly and John’s marriage? Will she see this as one more example of how her life would be better without him? Tell us your thoughts in the comments below!