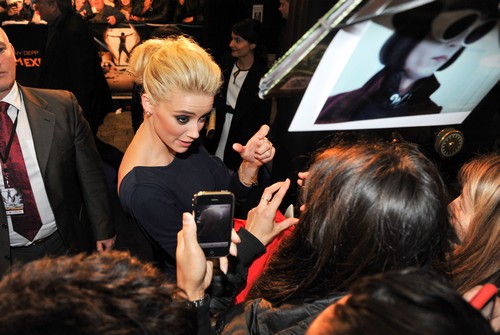 If the rumors are true, Johnny Depp is resorting to extravagant measures to keep Amber Heard as his girlfriend. According to a new report from Life & Style Magazine, Johnny recently, “surprised Amber with $50,000 Neil Lane diamond drop earrings.”

It’s been several years since Johnny and Amber met, yet he’s only gifting her with expensive jewelry now? Is he that desperate? Sure, it could be a sign of love and devotion, and we all know Johnny’s not a stingy man. But at this rate, either he’s going to marry her or she’s going to dump him. It’s only a question of which comes first. And I don’t see him marrying her, only because he was with Vanessa Paradis for so long and he didn’t marry her, even though she was the mother of his children. Johnny was with Vanessa for fourteen years, and he’s only been with Amber for only two.

However, Johnny is getting older and he may be feeling the need to settle down soon. At 50 years old, how many more years of partying can he have left in him?

There were also reports about how Amber was sick of dating Johnny, and she was only with him because of her career. But since her career clearly hasn’t seen any boost since she began dating him, is the jewelry his way of keeping her with him? Fine, she doesn’t have a great career. But she doesn’t have to pay for travel, she gets to go everywhere in a private jet, and she gets gifted with $50,000 jewelry on a regular basis – I doubt she’s complaining.

What do you guys think about Johnny gifting Amber with such expensive jewelry? Does he have an ulterior motive or is he just being generous? Let us know your thoughts in the comments.