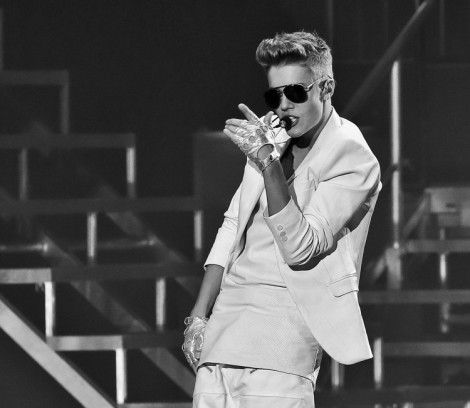 I’m totally grossed out right now. But you can’t blame him, right? No one wants that rubbing all up on them at a club so he has no choice but to grope. Ick. Take away the money and the fame and all you’ve got left is a little boy who just wants to touch your boobs and that’s just nasty. Selena Gomez practically looked like Mary Kay Letourneau next to that kid.

So he’s banned. Justin Bieber and his entourage were kicked out of a club in Vienna over the weekend. As usual, his people are blaming it on the fact that the place was too over-hyped with fans but, really, he and his peeps got a little too handsy and smashed some fans’ phones as well. Obviously he didn’t want his picture taken but perhaps hiding under a table would have been more mature – a la Lindsay Lohan? Do you think he’ll threaten to never return to the country like he did in England? Maybe he should just strike Europe off the map at this point.

All in all it was another stellar week for the child. He spit on his neighbor (oh, and threatened to kill him), got rebuffed by Selena AGAIN, got banned from the club and also got his monkey taken away from him. No, seriously. His pet monkey was seized in customs in Germany. DUMB ASS. Scooter Braun is apparently shitting himself. No one knows what to do with this kid. He’s definitely playing off the game plan at this point and is too up his own ass to listen to reason. But as long as he keeps performing and making everybody money there’s no reason to stop him. God forbid they let him relax and clear his head. Everyone keeps comparing him to Lindsay but I’m telling you… this is straight up Britney. Expect the shaved head any day now.

What do you think of the Justin Bieber/Vienna episode? Is he too far gone?