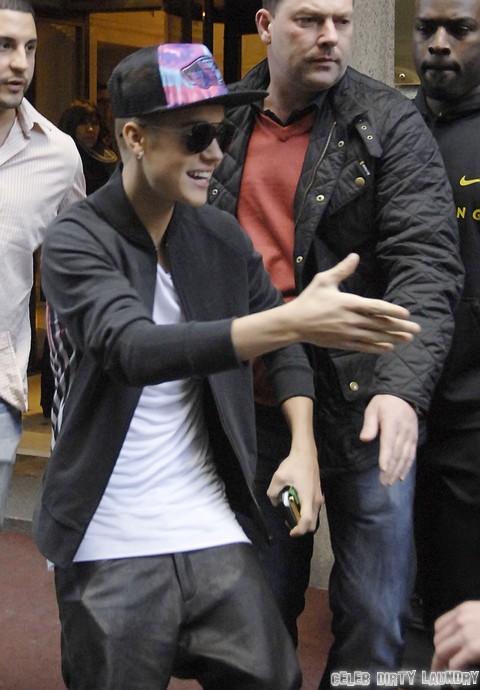 Justin Beiber’s European tour has hit another bump in the road. The Biebs was forced to change hotels in Paris on Monday after his attitude problem reared its ugly head again.  French television personality Jean-Marc Morandini writes on his blog Jutstin was “kicked out of the Meurice Hotel in Paris” because of his “attitude in the establishment,” and  “the nuisance caused by the presence of his fans around the buildings.”

Per Gossip Cop this story is not true.  But GC have a sad history of merely repeating the packaged statements of PR reps as if these were gospel… LOL! A member of Team Bieber supposedly told the website “Justin’s team decided to transfer hotels because of a lack of security measures to accommodate Justin and his fans. This became apparent after a large number of fans congregated outside the Meurice upon learning Justin was staying there (he had taken photos with fans earlier).”  A spokesperson for the Meurice Hotel also said the story is untrue. The decision to change hotels was “made by him or his team. We do not turn people away.”

If you are wondering which version of the story to believe you should go with Jean-Marc Morandini.  Justin’s attitude problem started to show in 2011 when he guest stared on CSI: Crime Scene Investigation. An actor on the show called him a brat and said he was a nightmare to work with. Also, there have been several nasty stories about Justin in the last couple of weeks.  I wrote a story last week detailing Justin’s arrogance in trying to have his birthday party at a club in London. His friend Jaden Smith was turned away due to being under age so Justin threw a fit and left the club in a huff.  The Biebs was booed by his Belibers for starting a concert in London two hours late with no explanation.  Also, he wrote on his Instagram a scathing attack on Lindsay Lohan saying “It must be scary to some people to think that this is just the beginning [for me]. I know my talent level … to those comparing me to Lindsay Lohan look at her 2012 tax statements ;).”

Who behaves like this? Someone who’s head has ballooned to an epic size.  Justin has too much money and too much fame for someone his age. He feels he is entitled to have his way.  I also blame his rotten behavior on the company he keeps.  Justin’s friend Lil Twist in particular has been nothing but trouble.  Justin and Twist were busted smoking marijuana and who knows what else they ingested. Then Justin lent Twist two of his very expensive cars while he was in Europe. Twist severely crumpled both cars.  I  expect this bratty, arrogant behavior to continue. Justin hasn’t hit rock bottom yet. He can’t see where he is wrong and that he needs to change his behavior.