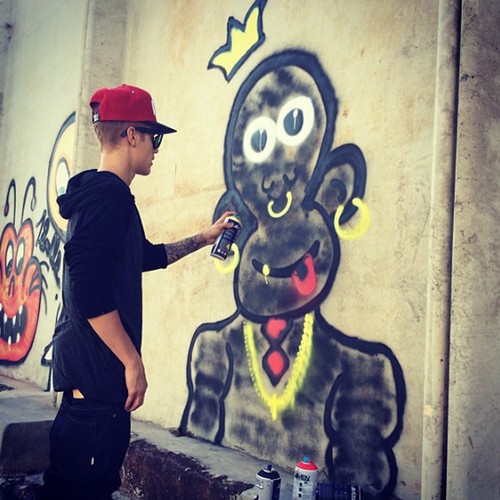 Well, he’s at it again! Days after Justin Bieber, 19, was caught having nap time by the tramp of the week, he’s been pissing off the locals by channeling his inner Banksy. Yep, that’s right! Justin was caught defacing an innocent building in Brazil.

Tired of hotfooting it around on stage impersonating Michael Jackson, wee little Justin had to take some “me” time and go let off some steam.

By letting off steam, I mean spray-painting a monkey complete with nose ring, earrings, lip stud, and to cap it all off, a pretty necklace. He immediately wanted to share his artistic abilities with the rest of the world, and stupidly posted the pic on Instagram with a little message saying this was his escape!

Faster than you can say pendejo, I mean jackass, Justin was accused of painting a “racist” monkey. The photograph drew the ire of nearly 12,000 followers who were none too pleased at the blatant insult. Many let fly with such gems like, “Someone needs to deck him, seriously,” wrote one, another said “he’s trying to be Chris Brown.”

Defacing public property is nothing new. Tell that to the police in Rio de Janeiro, who charged the little crook with vandalism. Brazil doesn’t take too kindly to their architecture being sprayed by the likes of an upstart like Justin, and defacing property carries a fine or a year behind bars.

I say hurl the little creep into a concrete cell and let him sit on it for 12 months. While the locals were ready to lynch Bieber and string him up from his designer high-tops, others didn’t understand what the fuss was all about.

Is it Political Correctness run amok or because many a musician and artists use offensive language and gestures all the time that it’s acceptable? One crisis communications expert said he just needs some image-control. Huh? Either he’s aware of his stupidity or he isn’t. Which is it?

Just because he’s 19 years old and on the verge of manhood, doesn’t give him the right to go gallivanting about in another country spray-painting whatever tickles his fancy. Things like this should have consequences no matter who you are! But I suppose when you have more money than sense and have paid gorillas who don’t care what you do as long as you’re paying their way to fantasy land, then I suppose you get to thinking that laws and boundaries don’t apply to your awesome self.

This graffiti incident caps a Brazilian stay plagued by a storm of debacles that included screaming obscenities at photographers, being kicked out of a respectable Rio hotel, and my personal favorite, visiting a local bordello.

He’s shaping up to be a fine young man isn’t he? His mother must be so proud.