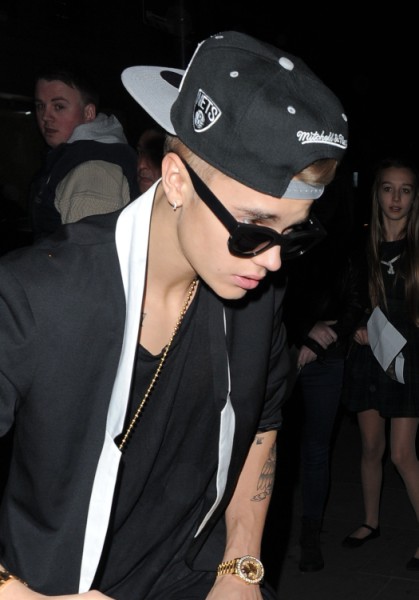 Oh, Selena Gomez, where are you when we need you? Justin Bieber is falling apart without your steady hand. First it was just the attitude and the outfits that suffered without your diligent guidance but now it’s the music. I called it from the beginning. A full on Britney umbrella episode is coming. I’m giving it a month. And now I’ve got sources backing me up with all sorts of red flag bizarre behavior.

A couple days ago the boy wonder turned up 2 hours late for his London O2 concert. Justin Bieber naturally took to twitter and blamed it on technical difficulties and clarified he only made paying customers wait a measly 40 minutes. So, really, they should take what he gives them and be happy. But they weren’t! And now we’ve got some juicy background info from workers at the arena. Apparently he showed up late to begin with because he was partying in his hotel the night before. By the time he got to the show all he wanted to do with play video games and prank around with his babysitter manager, Scooter Braun. He was also rude to two girls who won a contest to meet him and, reportedly, argued with his mom and handlers over going out on stage. One worker said he yelled a lot of nonsense about being the star and going out whenever he felt like it. Trouble in paradise?

I’m not surprised by any of this because Bieber is a spoiled douche and has been a spoiled douche for a very long time. The kid gets what he wants and shows no accountability for his actions. Why bother when you can explain yourself with a half-assed apology on twitter? He’s been raised to think he’s special and he’s the best so why are we shocked he actually believes it? And it doesn’t help that he’s also acting out because he’s uber lonely and depressed. Where are his guy friends? And I’m not talking about his smoking buddies or his lame manager. Kid needs a reality check. He’ll get it in a couple years when he’s not flying so high anymore. He’s never been taught that there are ups and downs in life. He’s only experienced the sweet and his mom and handlers are working their asses off to make sure it never sours (for them as well). But what kind of a lesson is that? Where’s the growth? What am I talking about? He’s a child star. There will be no growth. There will only be a monumental surge and a monumental fall. Unless… unless… Bieber can turn it around. Does this kid have the mental fortitude to become a decent person? If only these young stars could use all the energy they used to become famous to do just that. It would be something to see.

What do you make of the Justin Bieber tantrum? Does this probably happen a lot more than we think?