See Justin Bieber In His Underwear: No Competition for Justin Timberlake (Photos) 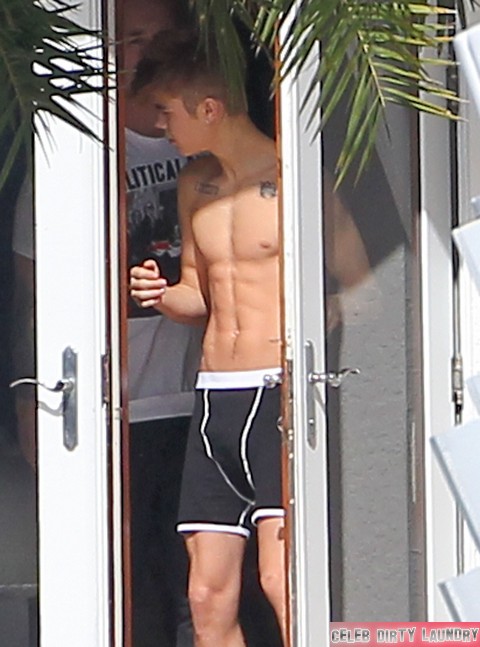 Since Justin Bieber is back on the prowl after splitting with Selena Gomez, it seems only natural that he prances around half naked. He is obviously on the prowl for his next victim, which he hopes to attract with his weird tattoos and his chicken legs. Someone should let Justin know that his boxer briefs should actually touch your thighs, not be baggy. Those literally look like he stole them from one of his gigantic bodyguards, he should really stick to the little boys department.

I am not sure what kind of look Justin Bieber is going for because all I want to do is put a belt on the kid. Come on, how uncomfortable must it be to have pants around your ankles and sagging off your butt? What I really want to know is how often he trips/falls but his posse has to pretend they don’t see it as they giggle under their breath. Do you think this is part of their contract? “Don’t ever laugh when Justin falls and NEVER help him up, it makes him really upset” The only way anyone would sign this is if they were getting a big fat paycheck… which they most definitely are.

Let’s be honest here… Justin is freaking out because he is well on his way to becoming irrelevant. First of all, he keeps getting caught smoking weed, which is such a fantastic impression to give to his young & impressionable fans. Second of all, his clothes are just… awful. And lastly, there are way too many talented people in the pop scene now and he is getting pushed out of the way. Obviously with Justin Timberlake making a comeback, in the sexiest way possible people will start saying “Bieber who?” At least this is the common dream of those of us who know that Timberlake is the real pop prince who would destroy Bieber in a dance/singing competition any day of the week.