Kanye West Defending His Time Away From Kim Kardashian In Paris – Do We Believe Him? 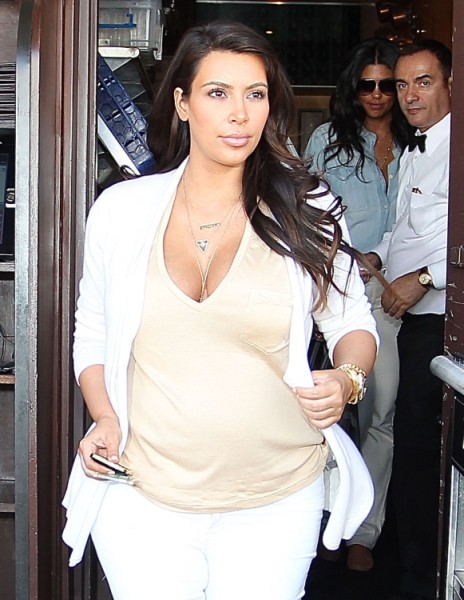 Someone’s doing damage control. It looks like Kanye West isn’t too keen on being labeled a deadbeat fiance/soon-to-be father and sources are leaking just how hard he’s working to finish his album in Paris and be by Kim Kardashian’s side in Los Angeles.

Someone (Kanye or Kris Jenner) told TMZ that, despite all appearances, Kanye is killing himself and spending a fortune to make it to all of Kim’s doctors appointments. He’s apparently spent over $100,000 in private planes to be in Los Angeles to play the supporting baby daddy role. He’s also so in tune with the situation because he’s got Kim’s doctors on speed dial and rings them up to discuss the appointments ahead of time.

So Kanye isn’t the selfish, egotistical douche who’s hiding in Paris while his pregnant fiance humiliates herself with divorce court appearances and unflattering outfits? I guess not. Are you a little disappointed? Is Kanye West spending all that money to be with her or is he just telling people that now because of the backlash from Paris? Kim Kardashian seems to be doing much better these days. The miscarriage scares and pain in the ass Humphries divorce are over. And her fashion is much improved as well. Perhaps Kanye’s presence isn’t that big of a deal anyway. Pregnant women usually have a doctor appointment every month until the last month when they might have to go in for a check up every week or so. And those appointments aren’t major. The doctor basically checks the heartbeat and confirms the baby is doing fine. They aren’t super exciting and most women go without their spouses. If Kanye’s flying back for all of those minor appointments then I’m impressed. That shows more caring and support than I thought possible for a Kim Kardashian spouse. So this little PR trick might have just worked on me. It’s pathetic that Kanye had to leak this information but it’s Kanye. What did we expect?

What do you think? Is Kanye West defending his absence by releasing this info? Is he off the hook now or is his stay in Paris still a little weird?