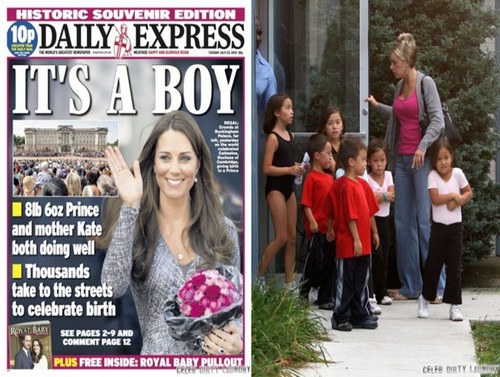 When one of her Twitter followers notified her, Kate tweeted, “WE FEEL HONORED! RT @franciepants3: @Kateplusmy8 saw on CNN.. calling royal baby watch “Will and Kate Plus 1″ Wonder how they thought of that?”

First of all, who is we? When she says ‘we’ feel honored, is she referring to herself and her ex-husband, Jon Gosselin? After all, the show was called ‘Jon and Kate Plus 8’, not Kate Plus 8.

Secondly, the fact that she even tweeted this is ridiculous. In what way could Kate Gosselin possibly compare herself to Kate Middleton? There is no comparison between a reality show star and a royal.

Obviously, it was the media who coined the term, but why would Kate turn down the chance for some free publicity? She’s busy with her cookbook , and we all know that she’s probably gunning for another reality show soon.

Besides, this isn’t the first time that Kate’s found a need to re-tweet about topics that are trending around the world. She’s tweeted about the Zimmerman trial, the Boston bombings, and the San Francisco plane crash. One could argue that celebrities often tweet about tragedies or what they deem to be important news topics, but Kate’s tweets are hardly neutral and just end up creating a bigger controversy.

What do you guys think about Kate’s tweet about the royals? Is she trying to get some attention? Or is she just flattered at the comparison? Let us know your thoughts in the comments.