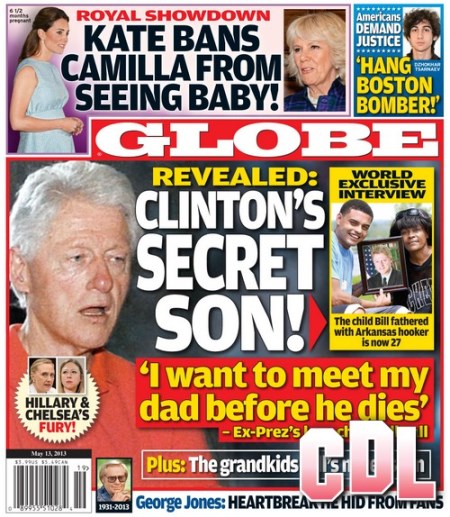 As the birth of Kate Middleton’s first child draws near the mom-to-be is making some serious decisions regarding her family and really getting her proverbial ducks in a row. It seems that after months of palace in-fighting Kate has decided the Camilla Parker-Bowles will have nothing to do with her child. According to the May 13th print edition of GLOBE, Prince Charles‘ wife has been officially banned from the child’s life even before it has arrived!

This new development will come as absolutely no surprise to anyone that has been reading the magazine over the past few months. GLOBE has consistently reported on the Royal showdown that has been underway ever since Prince William and Kate married two years ago. To put it simply, Camilla hates Kate presumably because she is everything that Camilla has never managed to become. Kate is thin, stunning and the Brits adore her, She’s the antithesis of Camilla who served as Charles’ side dish for 30 years before he officially brought her into the Royal fold.

Once Kate revealed her pregnancy things got very serious because Queen Elizabeth has been rumored to have promised the throne to William if he had a child before she died. Elizabeth is a smart cookie and like everyone else, despises Camilla so she certainly would rather put a bright young couple in control rather than Charles who has been reduced to a mere punch line and his alcoholic wife. Camilla has lashed out at Kate repeatedly and I’m sure the mama bear instinct eventually took over. Of course she doesn’t want that woman anywhere near her precious tot!

Also in the May 13th print edition of GLOBE you can catch up on all of the latest on the Boston bombing and the continued investigation surrounding it. Do you think that the Tsarnaev brothers had help? Will Tamerlan’s American widow ultimately be implicated? Should the death penalty be on the table for those who carried out this massacre?

There’s always a revealing shocker in every issue of GLOBE and this week is centers on Bill Clinton. Did you know that he fathered a child with an Arkansas hooker? Me neither but that boy is now 27-years old and has a child of his own. That’s right, Clinton already has a grandchild that he has yet to meet and the situation has Hillary Rodam Clinton and Chelsea Clinton furious!

This is just a teaser of what is included in the May 13th print edition of GLOBE magazine. As usual GLOBE covers everything from Hollywood to Breaking News and they are your number one stop for all things soap opera related as well. GLOBE delves bravely into the most critical stories without hesitation and never holds back the truth from its readers. The latest issue is on news stands now, beat the rush and get your copy today!