Kate Middleton Desperate Not To Be Compared To Princess Diana (Photos) 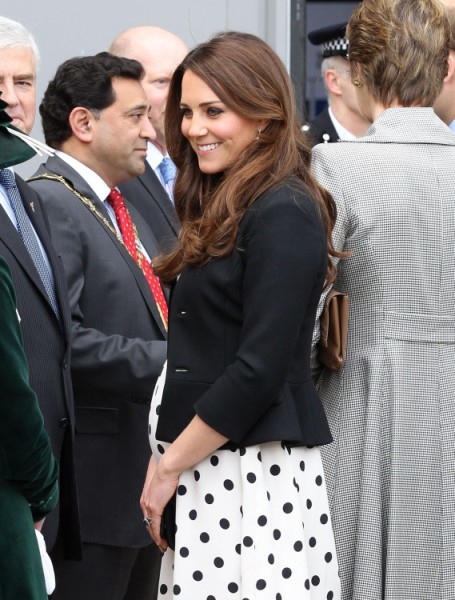 This has been nagging me ever since I watched Prince Harry try to change “nappies” yesterday on just about every news station.

Prince Harry opened the new headquarters for Headway, the brain injury charity supported by his late mother Princess Diana. Harry inaugurated their new base and underwent a series of exercises that show what it’s like to live with the constraints of brain injuries. It supposedly was a charity close to his mother’s heart and it’s great that he’s taking an active involvement in it. Anything Harry does gets plenty of attention – much like his sister-in-law.

As I’ve mentioned before, Harry seems to be taking over when it comes to his mother’s charities. Some are even labeling him the new People’s Prince. At first I thought Prince William and Kate Middleton would be all, “WTF dude, share the love. We want a piece of that too” but now I’m not so sure.

It’s almost as if she and William are highly reluctant for Kate to be seen following in Diana’s footsteps. You can understand why. From the very beginning people wanted to compare the two women and from the very beginning William has tried to make Kate stand out as her own person. Let’s look at the three new charities Kate announced: Place2Be, SportsAid, and the Natural History Museum. Place2Be does have to do with mental health but the others tend to focus on Kate’s main hobbies and interests – sports and art. She’s already patron of The Art Room and is an ambassador for the Scouts so she is working with kids but in a much different way than Diana did.

Perhaps she is still easing her feet into the role. Perhaps, in time, she’ll tackle grittier subjects like Diana did and Camilla Parker-Bowles is doing now after she feels like she’s adequately carved out her own identity. That might be awhile though. You don’t have to be a genius to guess why Kate is making all these appearances lately. She’s going on maternity leave and we won’t see her much after that baby is born which means Harry will have to pick up the slack. He’s the guy to watch at the moment, which makes his wife hunt that much more fun. Harry has the chance to be the real stand out of the royal family and continue his mother’s legacy. Is Kate Middleton desperate not to be seen copying her mother-in-law and, in being so, is she missing out on creating a worthwhile legacy of her own? Again, it’s still early. But charities are important to these people. They are calling cards. You are what you represent. Are William and Kate being too careful in carving out their own place in the royal family?

Check out the pics of the Harry, William and Kate Middleton/Harry Potter visit below to the new Warner Bros. Studios. Lucky bitches. I can get over the fact that she’s a princess and the most famous woman in the world but I’m jealous over this!

Bohomoth Details Kate and Will’s Special Visit To Warner Bros. Studios – Find Out What Went On by Clicking Here