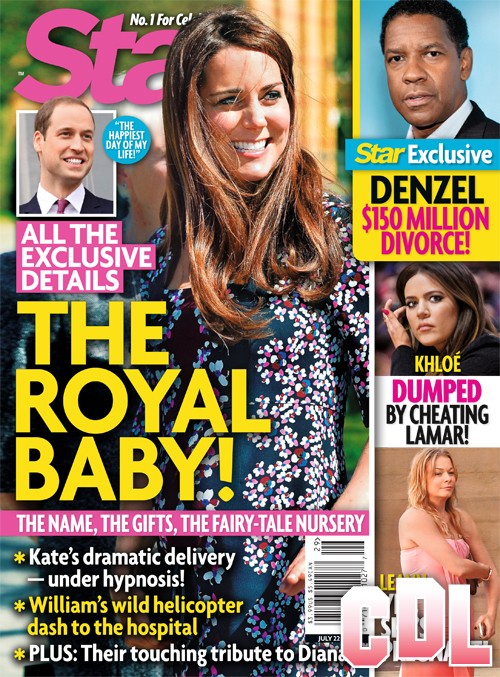 According to the cover of this week’s Star Magazine, Kate Middleton’s ‘dramatic’ delivery will be done under hypnosis. Prince William has reportedly been looking forward to what sources have dubbed ‘the happiest day of his life’ [but it hasn’t happened yet?], and the magazine has all the details – from the nursery, the gifts, and the ‘fairytale nursery’ – of the upcoming birth.

The report also includes some additional details like Kate and William’s ‘touching tribute to Diana’, which is sure to mean a lot to them. After all, William was much closer to his mother than practically anyone else, including his own father, Prince Charles.

There’s also the snippet about Prince William rushing to the hospital via helicopter, which we already know. Since he’s on duty in northern Wales, he has a helicopter at the base ready to fly him to St. Mary’s at a moment’s notice.

But the most important detail that the cover has is Kate’s labor reportedly being conducted under hypnosis. While this is not unheard of, it’s definitely not ‘tradition’ for the royal family to be delivered under hypnosis. Then again, Will and Kate don’t really seem to care as much about tradition as their parents and grandparents did.

The press is already camped outside of St. Mary’s hospital, and they have announced that they will give a press release as soon as Kate goes into labor. This will prevent a lot of undue errors in reporting, which is a smart move considering the speed of social media and the tendency of outlets to mis-report.

What do you guys think about Kate undergoing labor under hypnosis? Do you believe it? And if she’s actually doing that, do you think the rest of the royal family will be okay with it? Let us know what you think in the comments.