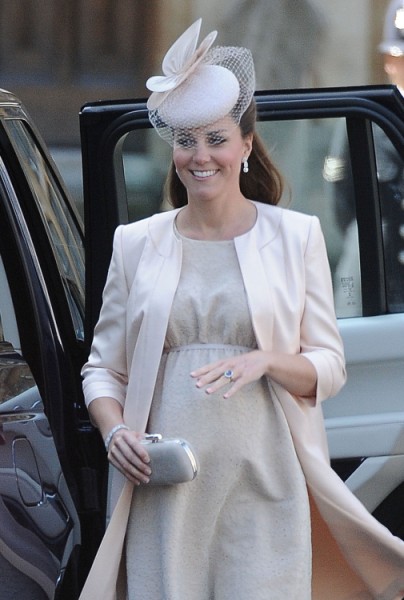 Do you get the feeling that most people want to see a royal baby girl? Kate Middleton would be the first mother of a female heir apparent, and that’s exciting and all, but I’m more interested in the clothes that would come out of it. Clearly, Kate likes to shop and buying baby girl clothes is beyond fun. Think of the dresses and the plaids and the bonnets. Making history is nice but imagine the Mary Janes on the Princess of Cambridge. And after two kings (presumably Prince Charles and Prince William) the country will be so ready for another queen – especially a modern, stylish one.

But I’m getting ahead of myself. I still think it’s a boy though Kate Middleton’s uncle, good old Gary Goldsmith, is hinting differently.

He told The Mirror that he believes Kate and William are having a girl but concedes they are the only ones that know. This is contrary to what the Cambridges have been saying all along which is they are waiting to know the sex of the baby.

I totally believe the couple knows what they are having. Those two control freaks? Bitches please. They aren’t fooling anyone. They’ve got those names all lined up already. Trust. But I don’t believe Uncle Gary has any clue as to what it is. This is Uncle Gary after all. He’s perfectly fine to joke around with and use for his Ibiza home but you don’t actually tell him anything. His mouth will run all day if you let it. The only way he knows is if Carole Middleton let it slip because Kate probably told her mom. How could she not? It’s her mom! They’re super close. And think of all the outfits she’s bought already!

So now I’m second-guessing myself. Could it be a girl after all? She could be besties with the future Queen of Sweden, Princess Estelle! Adorbs!