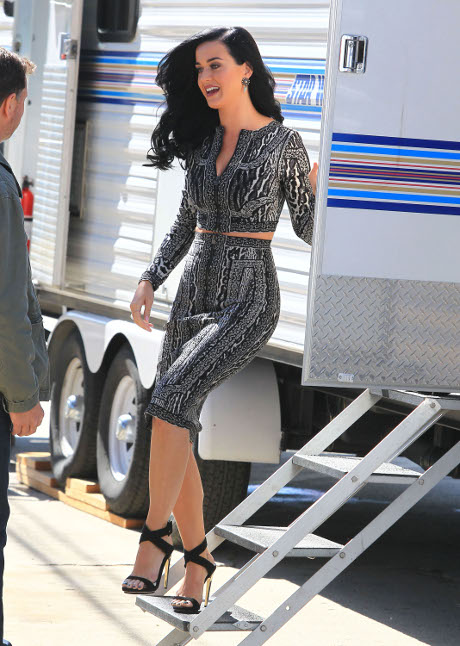 Lucky Katy Perry. Or ,unlucky Katy Perry, depending on  your tastes. It has been two weeks of interesting tabloid reports, where Katy has been linked to both Robert Pattinson and John Mayer several times. Mayer is, of course, Katy’s ex-boyfriend. And Rob is her…. friend/fling/boyfriend/would be boyfriend/etc?

Anyway, plenty of sources have pointed to Rob breaking up with Kristen Stewart because of Katy, and even if that’s not true, others all seem to agree that there was definitely something going on there. However, although Katy and Rob were spotted on a wedding date a week back, Katy was immediately spotted with John Mayer the next day.

Legitimate outlets all stated that John and Katy were trying to mend their relationship, with the Sun adding today that the two were ‘casually dating’. The Sun’s source also added, “They are just hanging out. They are not putting a label on it.”

So is Katy ‘just hanging out’ with both Rob and John? Or is she choosing John over Rob? We don’t know for sure, but since all the reports are stating that Katy’s attempting to make it work with John, does that mean that John wins out? Let’s be real – it’s Katy Perry. Is Sparkles going to be man enough for her? At least John’s good in the sack, even if he’s a bit arrogant about that fact. Rob seems more like the guy who will just sit, smoke some weed, and want to ‘make love’ as opposed to having sex. I could be wrong – maybe Sparkles is crazy in bed. Who knows, right? Except for Kristen Stewart.

Anyway, whether Katy chooses Rob or she chooses John, we’ll be here to let you know. I’m sure there’ll be enough sightings within the next month to be able to make an educated guess as to what’s really going on. Is Katy Perry dating John Mayer. Or . . . Is Katy Perry dating Robert Pattinson?