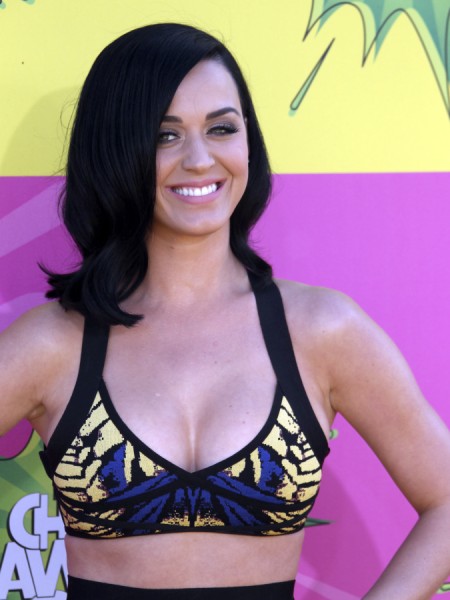 Oh I’m sure she’s comforting him all right. I’ll bet she has two lovely pillows he’s crying his eyes to sleep on at night too.

But everyone keeps telling me I’m wrong! Us Weekly and Now magazine (totally credible sources) have both come out and said Katy Perry and Robert Pattinson are just friends following the Kristen Stewart split. Apparently he gave her a shoulder to cry on when she divorced Russell Brand and she was there for him during the Rupert Sanders scandal last year. There’s nothing to it. But I just so don’t want to believe that!

Just because they didn’t hold hands and stare into each other’s eyes during that weekend wedding getaway doesn’t mean everything’s platonic. All the stories that have recently leaked about Katy’s love life are just too weird to me. After the Robsten demise broke we heard Katy was screwing her manager and then we heard she was giving douchey John Mayer another shot. The timing is suspect! I still think her people were just throwing out little bombs to divert attention. Katy doens’t want to be a homewrecker, especially for the Twihards! I’m waiting on this development. I have patience. I know I’m right!

But all the warm weather and Rupert Sanders remembrances are kinda freaking me out. Last summer was one of the best summers of gossip. We had Katie Holmes and her death defying leap from Tom Cruise’s clutches. We had the Robsten mini-coopering and also, let’s not forget, Kate Middleton’s nipples. How can you top that? Things have been so SLOW lately. True, we have Kim Kardashian’s baby and subsequent photo shoots and also Kate’s baby but that stuff is all planned fluff. Who’s going to be the smutty story of the summer? Will it be a Katy Perry/Robert Pattinson hook up? Maybe Kristen will have more meltdowns? Will Angelina Jolie cock block another Jennifer Aniston wedding? Give me ideas. I need something to look forward to!