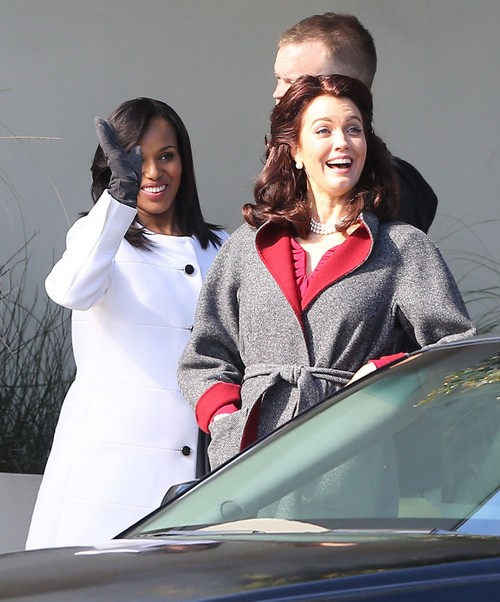 Right now Kerry Washington should be on top of the world. She is currently the leading actress on ABC’s hit show Scandal, just got married in June to former NFL player Nnamdi Asomaugha, and is expecting her first child. She should be on top of the world, but it seems the one person who should be the most supportive of her – her husband Nnamdi – is jealous of Kerry’s success and disapproves of all the time she puts into work. According to the National Enquirer:

“Nnamdi is complaining [Kerry] has time to promote her TV show, business ventures and charities, but she rarely spares an evening to be home with him.”

According to the source Nnamdi said he is concerned that they are already growing apart.

“Instead of slowing down during her show’s Christmas hiatus, Kerry funneled her extra time into her fashion consultation business and her responsibilities as a creative consultant for Neutrogena cosmetics,” said the source.

“Kerry feels she can balance a public life and private life with Nnamdi and their baby,” said the source. “But Nnamdi is not convinced. They’ve had several blow-ups, and each time Kerry swears she’s going to slow down. “But in the end she may lose something that doesn’t come along very often – a loving husband.”

Perhaps adding to Nnamdi’s disdain over Kerry working so much is that he isn’t working enough. Although Nnamdi was one of the best cornerbacks for a few years, age and injury caught up to him and hindered his ability to play at his optimal level, thus stalling his football career. He was cut from the San Francisco 49ers in November, and signed with the Oakland Raiders only to announce his retirement from the NFL on Friday December 27, 2013. At a press conference at the Oakland Raiders headquarters Nnamdi said, “After 11 seasons in the NFL, I will be retiring today. I’ve been blessed and fortunate to have a successful NFL career,” adding that,”another journey is starting for me right now.”

Perhaps once Kerry and Nnamdi’s baby arrives life will gain a new perspective for the both of them. Kerry may prioritize her schedule to put family first, and Nnamdi will learn to appreciate his wife’s success and her strong work ethics as he finds himself busy with his fatherly duties. If they aren’t able to do this they may just end up another Hollywood marital statistic – done before they have even really begun.