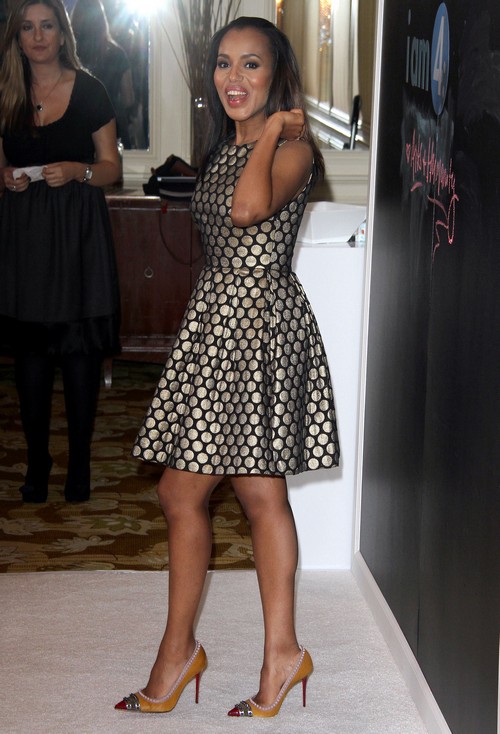 Last week when we first hinted at the idea that Kerry Washington might be pregnant it seemed like a lot of her fans were in an uproar at even the idea. Kerry steamrolled her way down the aisle less than two months ago in a wedding ceremony that is said to have caught even those closest to her by complete surprise. While I’d love to believe that instantaneous, undying love is what prompted the swapping of vows I’d have to say it looks more like a bun in the oven really was the catalyst.

Kerry showed up at an event this weekend leaving little room for doubt about her surprise pregnancy. Media Take Out has (photoshooped?) the visual proof that something is clearly going on with Kerry and anyone who has seen early pregnancy first hand will tell you that this looks like a baby bump. As of now Kerry has yet to address the rumors and I’m sure fans of her hit show, ABC’s Scandal are dying to know whether or not this obvious pregnancy will be written in to the show.

Kerry’s character has had a long-running affair with the President of the United States and added to that they have also touched on the topic of whether or not the country would be accepting of their president being one half of a mixed race couple. Obviously there is tons of story for Shonda Rimes to delve into and writing in Kerry’s pregnancy at this point would kind of be a no-brainer – don’t you think?

Is she pregnant or just gaining a bit of extra love pounds? Tell us your thoughts in the comments below!