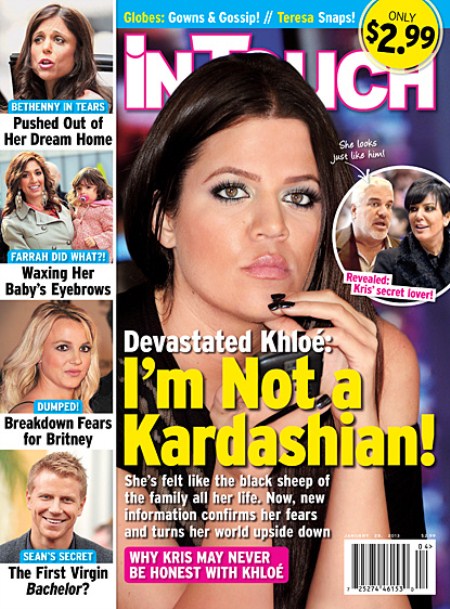 This may be the biggest Kardashian to date.  There is a picture of Kris Jenner’s former hairdresser, who Kris has admitted to boning on the side while married, and the resemblance between him and Khloe is uncanny.  There is no way this guy is not the father.  How long can Kris keep up the lie?  When a blood test reveals a positive match between the real father and  daughter, will she still deny the truth?

Also in this weeks edition, Bethenny Frankel is being forced out of her dream home.  Is the “Skinny Girl” being taken to the cleaners by her soon to be ex?  What did she do this time?

Farrah Abrahams, of Teen Mom fame, defends her actions.  After the backlash she received for waxing her three year old daughter’s eyebrows her mental well-being is questioned.  She truly believes she’s a good mom.  She is delusional.

After it was announced that Britney Spears and Jason Trawick would be going their separate ways, her people fear another breakdown.  Is crazy Brit coming back after being dumped?  Is another head shaving and 5150 hold in her future?

The latest Bachelor’s secret.  Is Sean Lowe still a virgin?  He is about to make history on The Bachelor if this is true.  The premise of the show is basically how many women can sleep with the show’s main star before he picks one he wants to pretend to love for the next three months or so.  How is this going to go down if this bachelor isn’t trying taste the goods ahead of time?

Check out these stories and more in this weeks edition of InTouch.