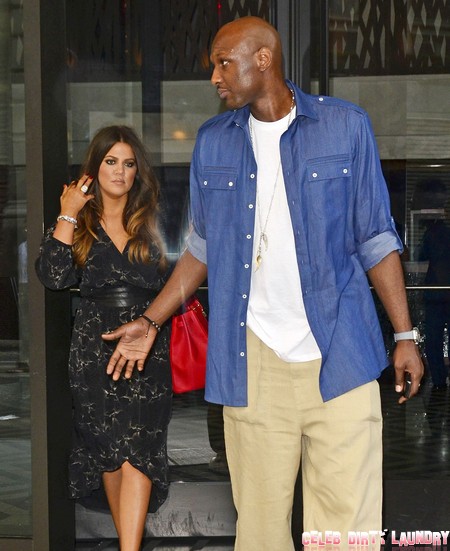 Khloe Kardashian has made almost as many headlines as her sister Kim Kardashian in the past month. The two have gone hand in hand because if Kim Kardashian is surprisingly pregnant, then Khloe must be absolutely gutted, right?  Not so according to a few sources. Instead Khloe, who has tried unsuccessfully for years to have a baby, is absolutely thrilled for her sisters good fortune. According to the latest issue of OK Magazine Khloe is using Kim’s pregnancy as a form of inspiration because Kim has the same fertility issues as Khloe. Kim’s conceiving has given Khloe hope that it’ll happen for her too.

In the meantime the reality star is continuing to go through all sorts of hormone shots in an attempt to boost her conception chances. The shots are leaving her bloated and feeling lousy but supposedly her mood has been pretty cheery in spite of what the tabloids are saying. Also on board with more hope is Khloe’s husband, Lamar Odom.  The LA Clippers powerhouse is supposedly encouraging the baby making efforts without adding extra pressure.

According to OK Magazine Khloe claims to be happily in love with her husband in spite of all the infidelity rumors and photos of her man partying with random women. When you have photographic proof that your man is having a great time with other women, it’s never a happy homefront. I understand Khloe wants to put on a united front but I’m not totally buying this end of it.

As for the baby making plan, Khloe says it’s ultimately in god’s hands now. Perhaps god isn’t giving them a child because Lamar isn’t quite as committed to the relationship as Khloe is at this point. Do you think she really is happy for Kim or is it one of those put on a happy face situations? Tell us your thoughts in the comments below!