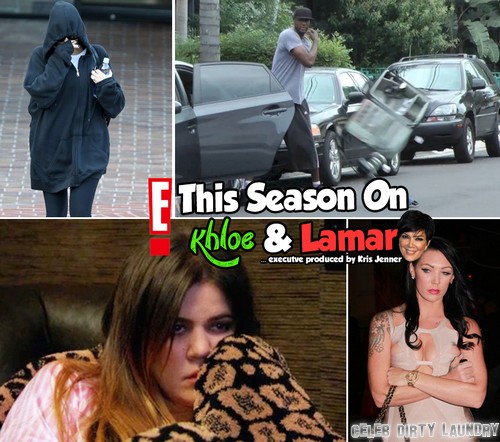 Despite the rumors and controversy surrounding her husband Lamar Odom‘s drug addiction, Khloe Kardashian has stayed silent over the past few weeks. She hasn’t discussed Lamar nor commented on the state of their marriage, and obviously, that’s only fueled the media interest.  Of course Khloe dropped the Odom part of her last name yesterday on her Instagram account so you know things are all over but the crying in that relationship.

However, according to several new reports, Khloe is under contractual obligation to E! and has to discuss her personal life. A source explains, “They have first rights and all exclusivity on her personal life. Khloe is planning on doing a very controlled ‘tell-all’ type interview with Ryan Seacrest. She trusts them and knows they are on her side and can sympathize with her.”

How sad is it that when you sign a contract for a reality show, you’re basically signing away any rights to your privacy? I’m actually surprised that Khloe’s managed to hold out for so long, considering the public interest in her marriage is continuing to climb. Obviously, some part of it is self-manufactured by the Kardashians themselves, but E! wins regardless. The more interest the public has in Khloe’s marriage, the more of them will tune in to watch Keeping Up With the Kardashians.

In this case, it’s probably better for Khloe to sit down with Ryan and clear the air, once and for all. We know he’s not going to ask any hard-hitting questions, and the interview will probably be vetted and controlled from the get-go. She really has nothing to lose, and it might even stop all the contradictory rumors that the tabloids are putting out there.

What do you guys think about Khloe possibly giving a revealing interview to E!? Do you think it’s a smart choice, or do you think she should continue sticking up for herself and refuse to whore out her private life? Let us know your thoughts in the comments.