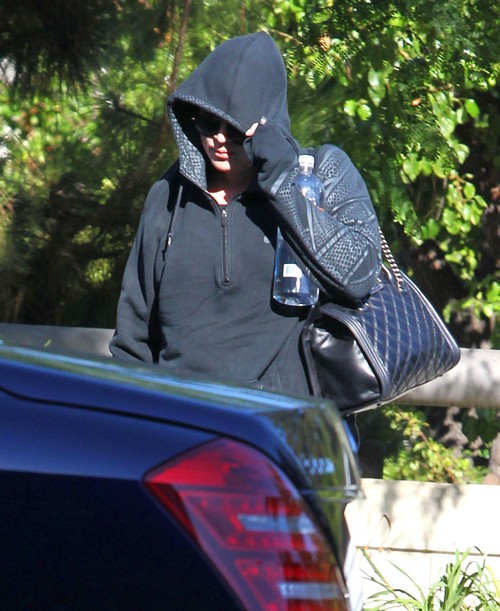 I feel like Khloe Kardashian‘s relationship with Lamar Odom has become a merry-go-round, with different and contradictory reports coming out every day, sometimes twice each day. The last we heard, Khloe and Lamar were days away from filing for divorce, largely due to his penchant for crack cocaine and Khloe’s refusal to deal with his addictions.

She reportedly wanted him to seek treatment, and he reportedly stated that it had to be on his terms. Since she kicked him out, he clearly felt bitter about the situation and went ‘missing’ for a couple of days, which is when Kris Jenner [supposedly] leaked the reports of Lamar’s drug addictions to the TMZ people.

So now, you’d think the couple was on the verge of breaking up for good, right? Well, not so much. Khloe was spotted out and about by several paparazzi clearly showing off the fact that she will still wearing her wedding ring – and I wouldn’t be surprised if she called the paparazzi to get those shots. Or even if she didn’t, she made no effort to conceal the fact that she was still wearing her wedding ring.

So what does this mean? Well, she’s sending a message to everyone, telling them that she and Lamar are still together, at least, in her mind. This doesn’t necessarily mean that things are going well between them, just that she’s not giving up on him just yet.

If it weren’t for the fact that we keep getting differing reports, I’d commend her commitment to her marriage, as well has refusal to give up on her husband. But because of all the leaked reports about the drug addiction and the drug binges, I don’t know what to believe anymore. She’s making sure the public knows about it in case of a divorce, but she’s still holding out on the hope that she and Lamar work things out? That seems the most likely option.