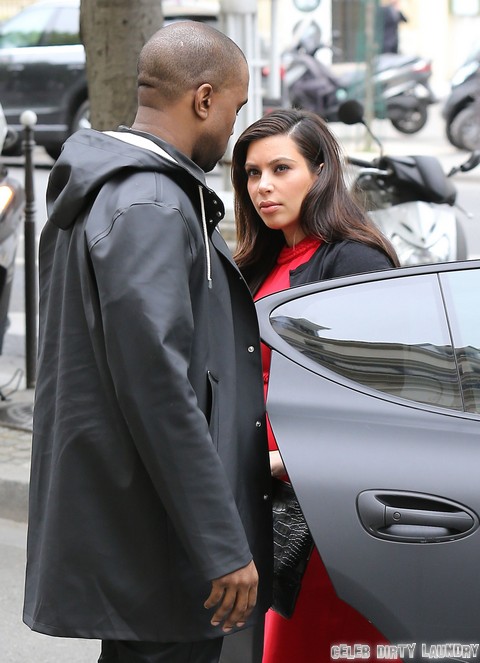 Here we are thinking Kim Kardashian really is trying to protect her daughter, North West, from the limelight while she and evil momager Kris Jenner have actually been shooting their reality show around the very same kid. Remember though, nobody bring it up to Kanye West. We all know his temper and after the way he tried to control Kim he probably thought he had her on lock-down.  Then this happened, courtesy of Perez Hilton:

“[Cameras have been] a constant presence in Kris’ house since Kim and Kanye brought North home from the hospital. Kanye has been angry about the intrusion, but Kim is contractually obligated to film.”

Secretly we know Kanye is going to start looking for revenge. He might have even taken it already. He has been going after photographers a lot lately.  Sometimes these guys appear to actually be innocent. I guess Kanye really is that petty.

Still I’m surprised at Kim. I know she’s hiding the whole fact she’s filming but did really have to do glimpses of herself. Yes Yes it was done to stay relevant but she could come out of hiding. it doesn’t have to be the baby just yet but she can. In the meantime here I am having a “duh” moment. I finally get the real appeal of hiding North. It’ll help spike the ratings when the show debuts. Completely understandable for these people. Not necessarily for everyone else but for these people, yeah. They built their lives and empires around their reality show, they know the three are too closely tied together.

I don’t know about anybody else but I find that sad. Imagine a woman trying to find a place in her house to hide and breastfeed. She sure as hell wouldn’t want them to catch footage of that. Then there’s the fact new parents are literally dead on their feet for a while. She can’t do that. She has to walk around with her make-up neat and tidy. Oh no no, Kim is going to have a breaking point and I suggest Ryan Seacrest better run before Kim hunts him down and squashes him with a stiletto.