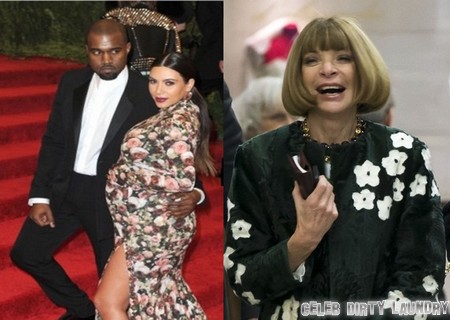 If this report is true, Anna Wintour truly is the most amazingly bitchiest person in the world. According to sources close to Kim Kardashian, it was Anna’s approval of the name ‘North West’ that caused Kim and Kanye to name their daughter after the freaking compass, and according to the same report, Anna might even be thinking about putting Kim on the cover of Vogue Magazine as a reward.

Anna’s feelings about Kim have been well documented over the past few years. Although Kanye and Anna are very close and often dine together, Kim was not allowed as a guest nor allowed to buy a ticket at last year’s MET Gala, despite Kanye being a star guest. This year, she was allowed and wore that hideous curtain dress, but alas – Anna still refused to put her on Vogue. As we reported a few months ago, Anna didn’t sugarcoat her feelings, with an insider saying, “Anna Wintour would allow Kim Kardashian on the cover of Vogue over her dead body.”

Could she have changed her mind? I mean, crazier things have happened. She could just be having a lot of fun at Kim and Kanye’s presence, in which case – go Anna! However, while getting Anna’s seal of approval probably helped them make up their minds, I still don’t see Anna agreeing to put Kim on the cover of Vogue. Even for naming her daughter ‘North West’. I just don’t see it. But hey, I could be wrong.

Do you guys think that Anna agreed to put Kim on the cover of Vogue for possibly naming her daughter ‘North West’? Do you think that she’s pretending that she doesn’t hate Kim as much as she actually does for Kanye’s sake? Let us know what you think in the comments.