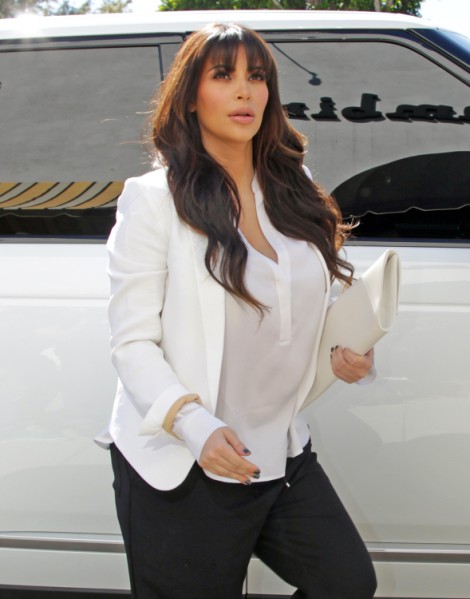 Look, I’ve been pretty nice to Kim Kardashian lately. I even defended her a few times when the tabs were going after her weight since she is obviously having a difficult time adjusting to her fuller pregnancy frame. I’m human after all. But I’ve got to draw the line there. When it comes to the Kris Humphries tomfoolery and her fashion choices I have to lay down the hammer because she is woefully out of her league at that point. And I have no problem with that. There’s no reason to hate when people just don’t know better. It’s when people think they know better when they really don’t that you have to stand up and say “Sit down Kim!” and this Vogue story is just one of those times.

It’s no secret a Kim Kardashian Vogue cover is everything that family desires. It’s the cream del la creme. It means you’ve made it in the fashion world. It’s also no secret Kanye West wants his baby mama to be a fashion super star since he seems to thinks he’s one. No, OK! magazine and Us Weekly are longer good enough for our Kimmy. But the problem is Vogue Editor, Anna Wintour doesn’t think so. She thinks Kim should stay being a poster child for the tabloids and refuses to let Kim on the magazine. It’s actually quite hilarious. It’s been said she hates Kim and her Sears fashion so much she won’t even let her into the Met Gala (otherwise referred to as the Fashion Olympics). Usually this isn’t really an issue. Kim tries to get into the event. She’s rejected. Case closed. But this year Kanye is performing and will surely bring Kim as his date. So she finally gets to walk that red carpet! It’s a punk theme. Jesus Christ, what the hell do you think she’ll wear? Will it be enough to entice our Anna? Remember she’s worn this and this lately. So she’s got a lot of enticing to do.

Star magazine reports there’s virtually nothing Kim can show Anna that will get her face on that cover. Anna’s even been rumored to say it will happen “over my dead body!”. But what if Kim didn’t sell her baby photos to People magazine? What if she played the game right for once? What if she withheld all the famewhoring she will naturally do with her young daughter and opted for a tasteful Vogue spread instead? Vogues would fly off the shelves. EVERYONE will want to see what that baby looks like. It would certainly be good for business. It might not be good for the magazine’s integrity though. Anna understands there’s a difference between the two. Kim has yet to learn that. My guess? Kim will sell those photos as fast as Kris Jenner can make the call to People. Waiting and learning are not their strong points.

Is Kim Kardashion fashion’s new It girl? If Anna Wintour concedes will others start to believe? I doubts. I love when Kim hits brick walls. Who knew Kris Humphries and Anna Wintour had so much in common?