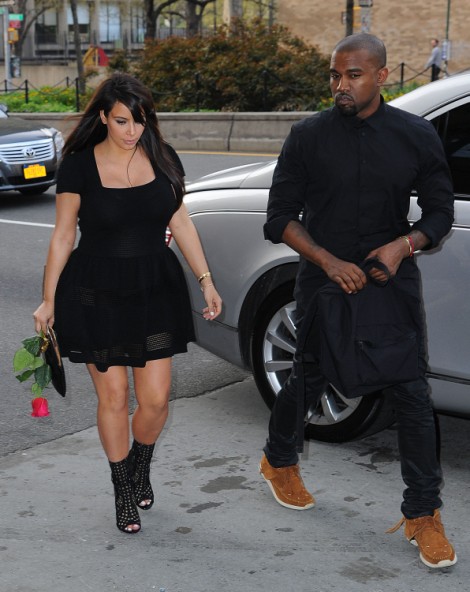 With all the baby bliss I almost forgot Kanye West was planning a tour for his new album. All we’ve heard about is what an amazing, doting dad he’s been to North West and breastfeeding extraordinaire Kim Kardashian. He actually showed up at the delivery and apparently loves his daughter!! Two claps for your sticktoitiveness Kanye! But he’s about to burst Kim’s balloons. Now magazine reports he’s still going ahead with his 10-month tour and Kim is freaking out at the thought of being alone. Did she actually think meeting his daughter was going to make him stay? Poor thing. She might have.

“Kim’s very unhappy that Kanye won’t be around much,” a source told the mag. “Even if she flew on a private jet to see him, it’d be very difficult for mother and baby to keep travelling.”

But I thought that was the whole plan? I thought Kim was catching shit from her family because she was going to nomad it around with Kanye during this time? That would be horribly difficult though. It’s supposed to start in August and won’t be finished until the start of next summer. That’s an awfully long time to constantly be on the move. Logistically, and emotionally, it sounds like a nightmare. But Kim is nothing but a pleaser, yet? What did Kanye just say in one of his latest interviews? Kim squeezes her ass into his nasty fashion because she loves him so much. So I have no doubt she’ll go the extra mile here. Because what’s the alternative? Sure, she could live at home with her family but then they are apart for ten months. That can’t be good either. Timing was definitely not on their side for this Kanye West tour. Kim Kardashian has a rough year ahead of her, don’t you think?