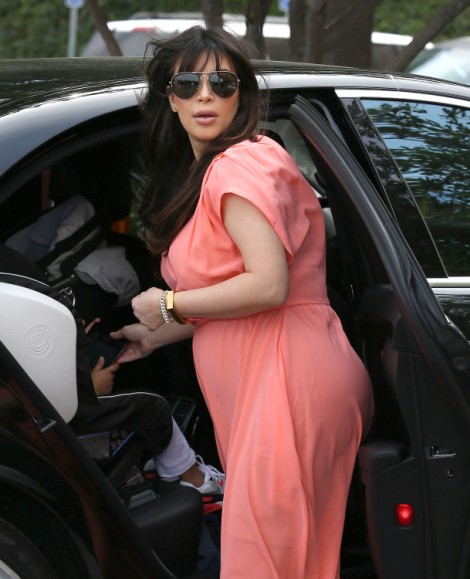 The press has had an absolute field day with pregnant Kim Kardashian. The reality star would probably have fared a lot better if she actually dressed her bump properly, instead of pouring herself into ridiculous specially made leather disasters that are neither comfortable, nor functional. We’ve all spent so much time gasping at the get-up of the day and contemplating whether or not baby daddy, Kanye West will ever set foot back on U.S. Soil again, that a huge concern has kind of been overlooked. Mainly, Kim’s actual health.

It’s been rumored that she is topping the scale at 200 pounds, which for even a pregnant woman who only stands 5 foot 2 is an awfully lot. Kim went from being miserable and driving everyone crazy with her talk of being fat and other forms of total self-absorption, to deciding that she’s been fighting a losing battle and simply gorging herself. Momager Kris Jenner may have suggested that gaining a lot now will ensure a better deal with a weight loss product later on and well, we all know Kim is motivated by looks and the almighty dollar. Since she’s not getting by on her usually sexy image she has to resort to something else.

According to the April 22nd print edition of National Enquirer, those close to Kim are really beginning to worry that she’s gaining so much weight that it’s going to work against her. She already has gained at least double the recommended weight to carry a healthy baby and as of now she’s seriously at risk for all sorts of conditions that can cause serious problems. Gestational Diabetes, hypertension and toxemia are all serious concerns. If she were to get the latter then Kim would be dealing with dangerously high blood pressure and swelling that would likely demand bed rest because it can be deadly.

Do you think Kim’s quest for attention later on is clouding her judgment when it comes to having a healthy pregnancy now? I don’t think we’ve seen her do or say much to indicate that she’s even trying to connect with her baby in utero! Tell us your thoughts on pregnant Kim in the comments below!