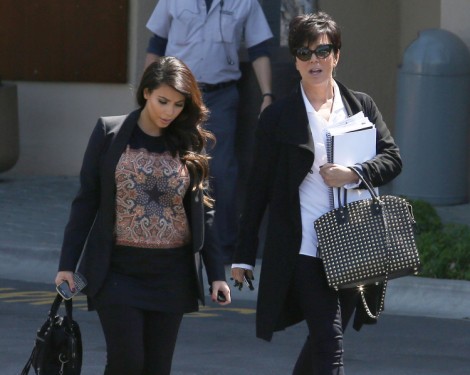 There just has to be a master plan. Kris Jenner wouldn’t let Kimmy go hog wild while pregnant unless there was a special payout in the end, right? Why else would she allow all the fat tabloid covers and weight talk during interviews? Is Mama Kris brokering a Kim Kardashian/Weight Watchers deal as we speak? Are we all just fattening her pocket with the incessant weight shaming?

Could be. Sources as Page Six seem to think so. According to the magazine “industry observers” are speculating that a deal will be brokered soon between the reality queen and the weight loss giant. Despite the fact that Kim’s people have denied it, sources still think it may happen because Kim keeps piling on the weight and dressing to show it. They are suggesting that Kim’s waiting for the bigger payout and letting herself go so dramatically to entice the deal. A Weight Watchers’ spokesperson said there is no truth to the rumors but it sounds just crazy enough, right? Who would intentionally gain more weight then they need to in order to negotiate a larger paycheck? A Kardashian might. They loves the monies and really have no shame.

So how much money are we talking here? Well, Jessica Simpson reportedly got $4 million to embarrass Weight Watchers last year. You’ve got to assume Kris would ask for more. Kim’s definitely a higher draw at the moment. Anything less would be a joke. But is Weight Watchers willing to risk getting burned twice? Jessica’s laziness proved to be unmanageable. Then she had the gall to get knocked up again before she was done fulfilling her contract. Is Kim worth it?

Hells ya she is! Say what you want about Kim but she’s a worker and Kris is always around to make sure of it. Kim’s a solid choice. She’ll starve herself with Tracy Anderson and work her ass off while lying dutifully for Weight Watchers. I have complete faith in that. Jessica and Kim both have empires but Kim’s hustle is much more impressive. Is it a pride thing? Does Kim have more of it? Or is it a confidence thing? Does Jessica have more of that which is why she didn’t care about losing the weight that quickly? I’m not sure. What I do know is Kim’s not done proving herself. She wants to be a fashion girl. She wants to be a mogul of some kind. She’s definitely not content being known as a reality star so that will drive her to take the money and honor the contract. I can’t believe I’m saying this but those Kardashians are good business people. It’s almost respectable.

Do you think Kim Kardashian’s weight is just a ploy to snag a weight loss contract? Will it work?