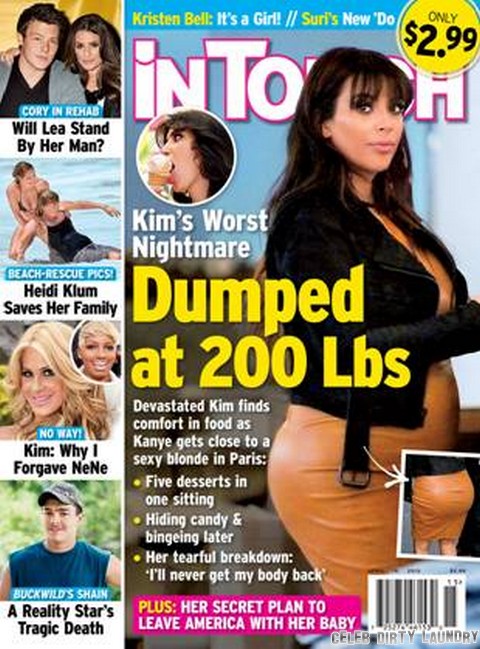 I hope Kim Kardashian isn’t one of those people that eats when they get depressed or else her weigh is about to really explode! If the rumors are true then she and baby daddy, Kanye West have pulled the plug on their attention-seeking romance and Kimmie is left to muddle through the last trimester of her pregnancy solely with the help of her family. According to In Touch Magazine Kim is craving high-calorie dishes like mushroom risotto, chicken and waffles and she has been doubling up on dessert.

Last week the reality star spoke out saying that she has only gained 20 pounds so far but I guess her scale is busted because those close to Kim say that at 5 months pregnant she has already packed on nearly 50 pounds. Obviously, a pregnant woman needs to eat well to feed herself and her baby but it sounds like Kim is going to be in for a shock when she delivers her child and is still left with a ton of weight to contend with.

In other couples’ news, In Touch takes a look at Corey Monteith and Lea Michele. He just announced that he is headed to rehab to deal with some serious substance abuse issues and Lea intends to love and support his quest for help. This is the second trip to rehab for Corey who will be missing from several episodes of Glee later this spring.

Buckwild’s Shain Gandee was found dead in a car earlier this week with carbon monoxide poisoning being the cause that killed him and two others. Pick up the latest issue to hear what those closest to the young MTV star have to say and how they are dealing with the shocking loss.

Could it be true? Could the feud between NeNe Leakes and Kim Zolciak really be over? According to In Touch, The Real Housewives of Atlanta ladies may have actually decided to bury the hatchet once and for all! You’ll have to grab the latest issue to read more about this shocking turn of events!