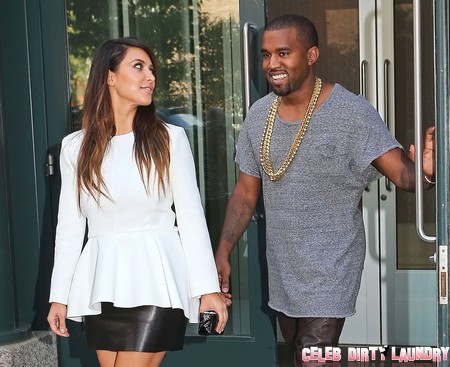 Are Kim Kardashian and Kanye West finally getting married? The two have been together for quite a while and they have North West, so it’s about time, right?

Well, maybe, maybe not. A new report states that both Kim and Kanye are seriously considering marriage this time around, but they’re wary because of their previous failed marriages. But even then, they’re both really keen to tie the knot.

A source for Perez explains, “They’ve been discussing marriage for a while. A wedding is in the works. Kanye has never been married before and wants a big wedding. So Kim is getting used to the idea again![Kanye]wants something really cool and big and over-the-top… They’ll most likely have destination wedding.”

I’m already dreading the day these two get married. Can you imagine? If Kim wed Kris Humphries in such an over-the-top wedding that dominated headlines for so long, what will Kim’s wedding to Kanye be like? A nightmare for whoever’s planning the wedding, that’s for sure.

The real question is – will Kanye and Kim actually get married this time? Wedding rumors are nothing new and they have been floating around for almost a year now, ever since Kim’s pregnancy was first announced. Now that she’s given birth to North West and they’re one big happy family, will they take the next step? Kim’s last marriage did last an entire 72 days, maybe this will last longer.

Maybe she’s scared of jinxing her relationship with Kanye. Some people say that having children leads to a stronger bond and commitment than marriage, and maybe that will be the case with her and Kanye. As long as she doesn’t return to her reality whoring ways.