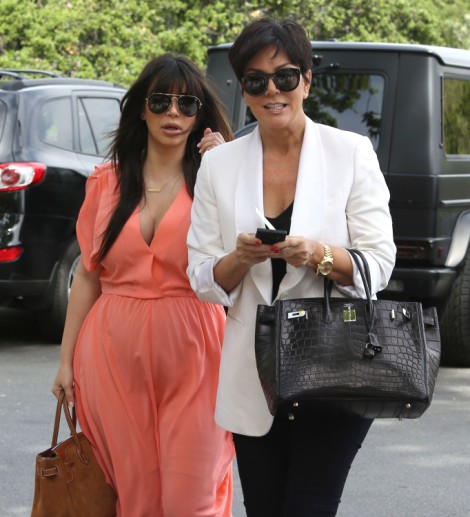 Go ahead, laugh biotches. Laugh your asses all the way to the bank. Kris Jenner has won again! Sources claim Kim Kardashian is days away from signing her weight watchers deal.

I actually thought Weight Watchers was going to play this one a little smarter. After getting burned by Jessica Simpson and her uterus of champions I figured the weight loss giant would stay away from celebrities for the time being. But, really, can you blame them? The exposure that comes along with a Kim Kardashian/Weight Watchers partnership would be incredible. People who don’t even read celebrity gossip know that Kim’s weight has become a major talking point (and punchline). Frankly, it would be stupid if Weight Watchers didn’t sign her.

According to The Daily Star, Kim has been given an offer and she’ll sign in days if it’s acceptable. How much do you think it’s worth? Jessica reportedly got $4 million so you know it has to be comparable. And, if the rumors are true, and Kim really did pack on the weight to entice the deal, it would have to really complementary. Kardashians don’t make asses out of themselves for nothing. They always make sure they’re fully compensated.

So, even though we probably got played, this is actually a sweet deal. Who doesn’t want to see Kim lose the weight? America might have a love/hate relationship with that family but everyone LOVES a nice story on weight loss. Kim Kardashian would definitely give it to us. You know she’s going to waste no time getting back in shape and into more hideous “high fashion” clothes. And then she’ll work on her maternity line and start the baby clothes next. Kardashians don’t just make lemonade out of lemons – they make it out of everything.