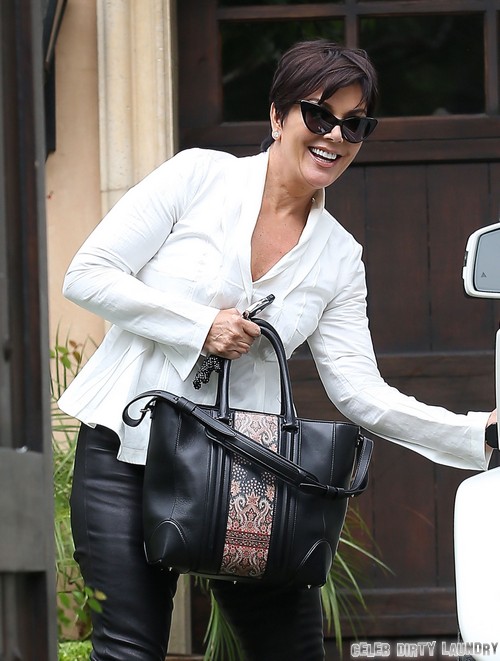 I think Hollywood is finally starting to catch on and that’s why Kris Jenner can’t get anyone to sit across from her for a chat on her upcoming talk show! She never makes headlines for anything good and more importantly, she doesn’t seem to care. I’m starting to think she secretly enjoys toying with her long suffering husband, Bruce Jenner’s feelings.

Kris has had a 30 year relationship with Alex Roldan who officially is dubbed as her hair stylist. He is also rumored to be Khloe Kardashian’s real father – Kris never seems to be able to leave her past sexual relationships in the past. It’s like she believes that if it was once hers then she can go back for more whenever she pleases.

According to the May 27th print edition of National Enquirer Kris was recently getting her hair done and had her top off so that it wouldn’t get wet. Of course her cape fell off when Alex was there and the purposeful whoopsy led to an embrace and kiss between Kris and Alex. Unfortunately they were in a back room of his salon and were seen. It took no time for the news to travel back to Bruce Jenner and I’m sure Kris behaved like usual. She made him feel like an idiot for distrusting her and she normalized the whole situation so that Bruce would think that everyone loses their top at the hair salon! Still we expect Bruce to file for divorce any day now – especially with Kris forcing her 17-year-old daughter, Kendall Jenner, to post crotch shots on Twitter!

What it actually was is an indication of what actually goes on behind closed doors between Alex and Kris. There’s no way this guy would put his mouth on her in public unless he was super comfortable with Kris in that way. Do you think these two are having a full out affair? Will Bruce ever leave Kris? Tell us your thoughts in the comments below!