Kris Jenner Breaks Down Over Her Alleged Child Abuse of Kourtney and Kim Kardashian – She Looks Guilty! 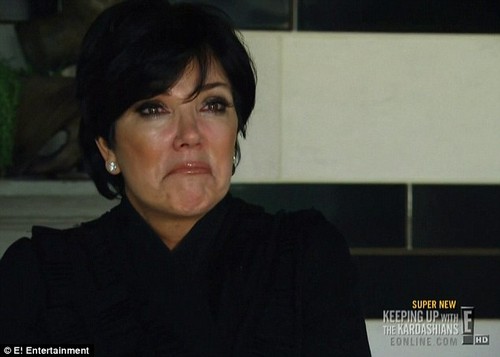 Kris Jenner frightened the living daylights out of everyone who watched Keeping Up With the Kardashians the other night by attempting to emote. She ‘broke down in tears’ [a.k.a she stretched her facial muscles as wide as they could possible go until it looked like she was crying] because of the stress from dealing with the abuse allegations from Ellen Pearson/Kardashian, Robert Kardashian‘s widow and wife after Kris.

This is the same Ellen that accused Kris of abusing her children at a young age in the massive In Touch Weekly expose a couple of weeks ago. While we obviously can’t verify the accuracy of the claims, Ellen claimed that Kris used to abuse her children when they were younger, giving examples of Kris twisting Kourtney’s arm during an argument and sending a ‘flu-ridden Kim to a friend’s house’ so she could have a boyfriend spend the night. For what it’s worth, I honestly don’t think any of this is any different from what she does now, and I don’t think it constitutes ‘abuse’, necessarily.

Either way, the Kardashians are now deciding to take legal action against Ellen, claiming that whatever she’s told In Touch is – to paraphrase – full of sh**. On Sunday’s show, we saw Kris and her daughters talking to an attorney about how to proceed with the case, and that’s when we saw the terrifying sight of Kris desperately willing herself to cry on camera – a look that’s not flattering on anyone, much less someone who’s had that much plastic surgery. She ‘cries’, and then says, “I just can’t…. It’s really wrong what she [Ellen] has done.”

What do you guys think about Kris breaking down on the show? Do you actually feel sorry for her, and do you think Kris and her family will win the case against Ellen? Will the Kardashian/Jenner axis of evil actually dare to bring such a case to court and risk exposing the truth? Do they want Ellen and her lawyers exposing every sordid detail of the past (and there so many!) including the truth about Khloe Kardashian’s biological father and Kim’s sex tape, etc.  Let us know what you think in the comments.

Editor’s Note: I don’t know abut you guys but I don’t cry over false accusations – I cry from remorse, from feeling badly about what I did wrong, not from things others’ might say and that aren’t true.