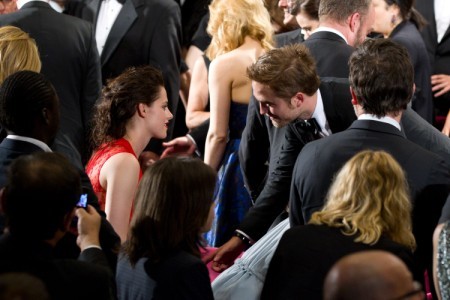 What a difference a year makes. I had such a fun time this morning looking back at the Kristen Stewart/Cannes Film Festival pics from last year. This was right before the Rupert Sanders scandal hit and she and Robert Pattinson both had films to promote there. Do you remember all the stories? They were caught kissing on balconies! Kristen was overwhelmed by Rob’s Cosmopolis performance! They were in love, love, love for all to see! And then the mini cooper took over and that was that.

But now they’re back! The Sun is claiming a Rob and Kristen Cannes 2.0 this year and they’re making a whole big thing out of it. Apparently the steady couple has booked a $7K a night suite at the Hotel Du Cap and, after Rob’s done working the festival, they plan on doing some lovely French camping. “Robert’s going to be in Cannes on promotional duties and is taking Kristen along. They have their eye on doing a tour of the local museums, like the Picasso one in Antibes, and Renoir’s house. But they’re also going to go down to Provence and visit the vineyards there. You can camp in the grounds of these massive chateaus and they’ve decided they need some ‘normal living’,” a source said.

The hyped Robert Pattinson camping trip has been happening for awhile now so I hope they actually do it this time. But is anyone else worried? Kristen and Rob do well in Cannes but it’s the after that’s sketchy. We all know what happened last time…. I’m just screwing around for the most part but it’s funny looking back at the pics now. How could she go from Cannes to Rupert in 60 days? She was young and stupid, I guess. It happens. Hopefully for Rob history doesn’t repeat itself!