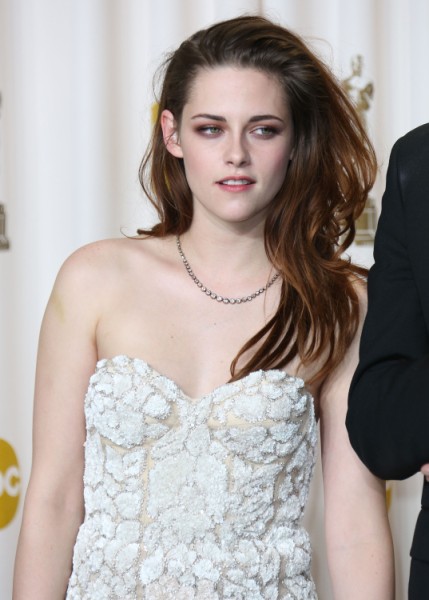 Really? You’re worried about being the face of major movie franchise? So… always looking above it all and annoyed and being known for a having a piss poor attitude and an unwillingness to just shut up and play the game aren’t reasons that would keep people from wanting to work with you? My bad. Because Jennifer Lawrence is heading TWO huge franchises and she just won an Oscar. But, as we’ve already discussed, these women are a tad different in how they handle Hollywood. Oh, but I’m picking on poor, worried Kristen Stewart. I should give her a chance to explain herself. Here we go.

“Of course, there are people who so genuinely love the Twilight movies and books that they’ve said, ‘Every single time I see you in a movie, you’re still Bella to me.’ It doesn’t bother me. I just say, ‘Fantastic, you’re a big Bella fan. I can totally relate. I’m a fan of Bella, too.'” Kristen told the Chicago Sun-Times. “I didn’t take many other projects while we were doing Twilight. In the end, Bella didn’t stick with me more than any other character. I do think people assume that I’m Bella. I have to prove to them that I can do other things and that she was just a character.”

OK, so I was just picking on Kristen because she really didn’t say anything too bitchy there. There could be undertones but I probably couldn’t convince you of them anyway. But, seriously, the reason people probably always see her as Bella in her movies is because she acts the same in all her movies. There’s the long breaths, the lip biting and the clenched jaw/shaking of the head thing she does. She’s not a lost cause. She’s young. She just has to work on it a bit is all. That’s why it’s a job. That’s why it’s called work. Dating her co-star probably didn’t help in the long run either. I wonder if the Kristen Stewart/Robert Pattinson split rumors will actually help her career. Can’t hurt at this point….

And I suppose it could be unfair for me to keep comparing Jennifer and Kristen at this point even though they are the same age and compete for roles. Twilight fans are not X-Men/Hunger Games fans. They are a species unto themselves which will make Kristen’s transition difficult but not impossible. I loved Adventureland and Snow White and the Huntsman performed really well for her. Too bad she had to screw the director in her car though. I understand people are reluctant to see her as something other than Bella but that couldn’t have helped career matters much either.