Kristen Stewart: High Or Bored At Met Gala? Falls Asleep On Way There With Cameron Diaz 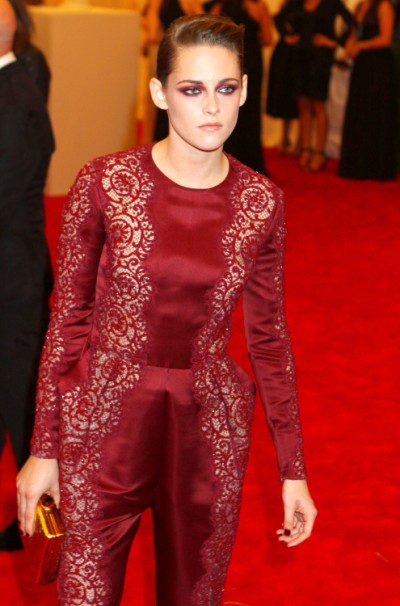 Dear Kristen Stewart, if you don’t want to go to these major events then just DON’T GO! Who’s is making you since you obviously don’t want to be there? Is there anything sorrier than Kristen Stewart walking down a red carpet? Don’t bother answering that. The answer is no.

Probably should have known it wasn’t going to be one of her nights when she fell asleep on the way there. She shared a car with Stella McCartney (who designed her Spanish-inspired jump suit) and Cameron Diaz. That is a motley crew, right? What in the world would Kristen and Cameron have to talk about? Oh, right, that’s why the poor girl just shut her eyes and put her head back while Cameron kept squawking. You can see the pics here. They’re pretty hilarious. It’s almost like Kristen’s saying to herself: “Dear God, will this woman ever shut the hell up?”

And then she hit the red carpet and it was all downhill from there. I get it. Everyone was giving their best Blue Steel last night but Jesus Christ you look like a matador! Calm the ef down! Was she just annoyed that Robert Pattinson apparently bailed on her? Or was she pissed Katy Perry tried to talk to her? Check out the pic below. I hate to photo assume but that isn’t the happiest pic of Katy and Kristen. Perhaps all of Katy’s nights with Rob are starting to get on Kristen’s nerves….

Or she could have just been high. Kristen Stewart is known to do that and she had a long night of posing ahead of her. You got to do what you got to do.

What do you think of the Kristen Stewart/Met Gala appearance? Should she have stayed at home and gotten some sleep instead?