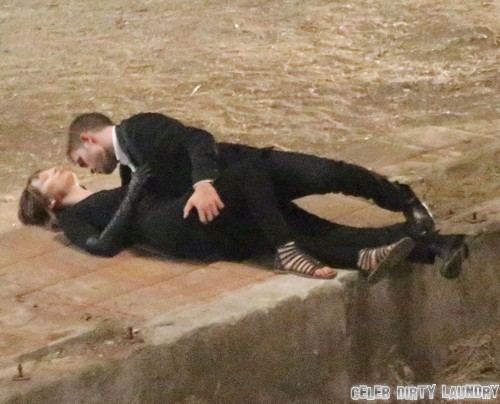 I mean, look at it objectively – Rob is much, much better looking than Rupert, even on his worst day and Rupert’s best day. And when it comes to personality, granted we haven’t seen as much of Rupert as we have of Rob, but even from the little we’ve seen we’re able to discern that Rob is miles funnier and more interesting. To be very honest, watching Rupert in an interview is like watching paint dry on a wall, especially in comparison to Rob.

So why did Kristen stray? For something unexpected, for something different, and because she was sick of the sexy times with her boyfriend? Maybe that’s why she wanted Rob to play Christian Grey in the Fifty Shades of Grey Movie, because he’d finally learn how to have proper sex. Maybe she was sick of ‘safe’, and wanted something that felt exciting and dangerous.

Look, when an actress has a history of cheating on her boyfriends [cough, Michael Angarano, cough], then it’s likely she’ll do it again. There’s usually an underlying reason – it could be because she’s too chicken to break up with her boyfriend face to face, or it could be that she’s always craving the adrenaline rush of cheating. In this case, I think it was a bit of both, but now that Rob and Kristen are supposedly back on talking terms, it’s understandable why she would have been pushing him towards the Fifty Shades of Grey role. Of course, he didn’t end up taking it, reportedly to her chagrin, but it definitely would have increased the sexy quotient in their relationship. After all Rob was E.L. James’ first choice for the role.