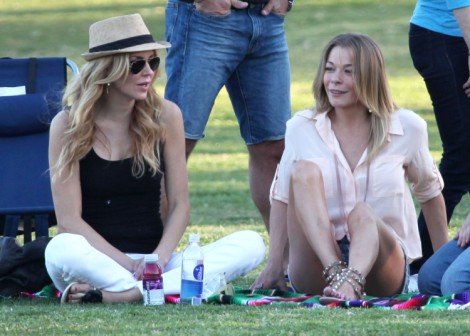 I mean… shit… can you blame her at this point? Brandi Glanville is laying her ass out bare. It’s awesome for us but I can’t imagine what it must feel like to be LeAnn Rimes right now (or ever). She stole a piece of crap husband. Does she deserve all this? Shouldn’t Brandi really be thanking her considering her career would be nothing without this whole scandal? Brandi says she misses her family but I kinda think she likes all this new found attention. She’s made a lucrative career out of hating someone. And, apparently, LeAnn is beginning to lose it since that someone is so very obviously her.

But, sadly enough for this woman’s overwhelming lack of self esteem, it’s mostly the heat being thrown at Eddie Cibrian that’s causing LeAnn to toss and turn at night. Drinking and Tweeting is chock-full of nasty little Eddie stories including, my own personal favorite, his impotence problems. Now there’s plenty of fun regarding LeAnn’s early weight issues, her new teeth and her drinking problems but it’s the fact that Eddie had sex with Brandi after he already started the affair with her that’s really bugging LeAnn. Honestly, if you can’t trust a married man who’s cheating on his wife with you, who can you trust?

“LeAnn has always worried about Eddie being attracted to Brandi,” an insider told Radar Online. “It was devastating for her to learn that Eddie didn’t leave Brandi, that he wanted both of them.”

I guarantee you LeAnn, you were the only one devastated when learning that news. You’d think she’d be comforted by the fact that Eddie has to stay with her because his image is totally shit at the moment. We all think he’s a douche but, as of right now, he’s a married douche. If he leaves LeAnn he’s on a one-way ticket to a VHI reality show. Trust. Why can’t LeAnn have a glass of wine and relax in the comforts of that knowledge?

Do you believe LeAnn Rimes’ losing it over Brandi Glanville’s book? She doesn’t seem like the steadiest character during the best of times….