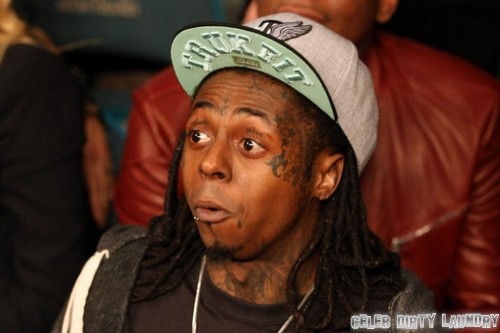 Lil Wayne’s liking for Sizzurp is starting to catch up with him. Weezy was hospitalized in Los Angeles this week after suffering yet another seizure.  Per TMZ he was released from Cedars-Sinai hospital on Wednesday but was almost immediately readmitted after a body guard found the rapper unconscious. TMZ also reported Lil Wayne was in critical condition and even read his last rites (later deleted).

Apparently the news of the rapper’s condition has been exaggerated. Perez Hilton has a quote from a Lil Wayne insider “Wayne is fine. He drank too much Sizzurp to get a better high. He needs rehab but he’s not close to death or anything. He’s fine and just coming down off the high.” The rapper himself even tweeted his fans that he is doing OK.  While overdosing on any drug can cause seizures another cause could be the drug was tainted.  Per Gather, Weezy’s Sizzurp may have contained antifreeze as well as the usual codeine, Sprite and Jolly Rancher candy.  Media Take Out is saying,  “It’s not clear whether Wayne suffered an accidental OVERDOSE because of the potency of the concoction—or whether the medicines (obtained over the internet) were somehow corrupted—or whether there was a foreign POISON in the concoction. But whatever it was—it nearly KILLED the greatest rapper in the WORLD.”

Whether or not the Sizzurp was tainted it is a dangerous drug since it contains codeine, a powerful narcotic capable on its own of causing addiction and death.  Lil Wayne needs to take this last trip to the hospital as a wake-up call telling him that he should not be ingesting Sizzurp or other recreational drugs.  Lil Wayne is damaged goods – his health is delicate and another binge could easily be his last.  He should quit for health reasons but also to set a better example for his son, Dwayne Carter III. Father and son were recently in Atlanta enjoying the Georgia Aquarium.  Lil Wayne had a great time hanging out with his little buddy.

If he wants more good times like this with his son he better straighten up! It’s time to call Dr. Drew and get Weezy into rehab.  Actually wait – Dr. Drew’s patients often relapse and die.  So maybe Lil Wayne needs to dump the posse and grow a brain – his ridiculous lifestyle kills its participants and also sends them to prison.