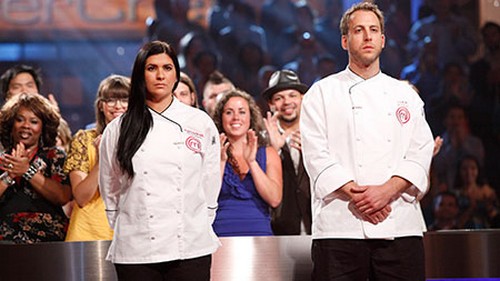 MASTERCHEF airs another 2-hour episode tonight on FOX with their season 4 finale called “Winner Chosen.” On tonight’s show the top two finalists have one last chance to win the MASTERCHEF title.  Did you watch last week’s episode? We did and we recapped it HERE for you.

On last week’s show the judges got some very special help from their sons, who stopped by the MASTERCHEF kitchen to judge the next mystery box challenge. Then, the contestants faced the daunting task of recreating one of the greatest dishes the judges ever tasted. Later, in a field challenge, the remaining five home cooks visited a ranch where they each prepared one Southern-inspired dish as part of a special summer luncheon for local charity volunteers. After the first part of the competition, two home cooks advanced to the finals and the Top Four, while the bottom three contestants faced a pressure test that will end the competition for one home cook.

On tonight’s show the Top Two finalists have one last chance to prove to the judges that they have the passion, skill and drive worthy of the MASTERCHEF title. In their final challenge in the MASTERCHEF kitchen, the two home cooks will conceptualize and prepare the most important three-course meal of their lives. Later, the judges will reveal America’s next MASTERCHEF, and the deserving home cook will walk away with a MASTERCHEF trophy, a book deal and the $250,000 grand prize. Find out whose culinary dreams will turn into a reality.

Don’t forget to join us for our live recap tonight at 9:00pm when MasterChef Season Four on Fox. While you wait for the recap, let us know how your enjoying this season of MasterChef.

On tonight’s season finale, it all ends for one of the contestants. It will be either Natasha or Luca to take home the prize and cookbook deal. Both are very driven and want everything this amazing opportunity can offer. They both have to pull out all they’ve got.

Tonight’s challenge is for both contestants to cook the perfect three course meal. Nothing can fall short of expectations, and for once the judges are being generous with time limits. For appetizers the two chefs are given a full hour. If anything goes wrong from this point on then it might be truly over for one of them.

There are some concerns though with what the contestants chose for appetizers. The judges are worried Luca’s dish will be too sweet. While Kristi’s opinion was asked on the dishes. She’s still firmly in Luca’s corner and Natasha’s simplistic dish has not swayed her. Why did the judges ask her of all people? Do they want to see a brawl?

Fortunately, time is up, and the contestants have to bring their dishes into the private kitchen area just for the judges. That’s nice. Now, if their dishes turn out to be horrible at least they won’t get humiliated in front family.

The dishes are tasted and Natasha’s dish gets nothing but approval — but then there’s Luca’s dish. Joe Bastianich loves Luca’s dish and thinks it comes closer to white cloth than any other dish in the competition. However, the two other judges feel that appetizer was too heavy and could hurt the entrée.

For entrée, Natasha cooked a Five Spice MonkFish with Jasmine Rice and Coconut Curry. Her dish looks perfect and the fish appears to be fully and thoroughly cooked, but her dish is too spicy. If only she could have turn down the heat. Then it would have been perfect.
Luca cooked Braised Beef Short Ribs with Chanterelle Mushrooms. The only way to know if short ribs are cooked perfectly is if it falls apart once they’re cut. He cooked the ribs superbly. Although it still is too heavy. Almost heart attack inducing. Chef Ramsey says it could kill him if he ate everything Luca cooked but at least he would die happy.

The time has come for dessert and both contestants want to cook Pana Cotta. Natasha is risking much by creating two Pana cottas and Luca is risking his dish by adding tomatoes to his Pana cotta. Natasha is carrying on well — but Luca runs into a problem. He forgot to do a necessary technique. So he has to start over while Natasha has already started a second desert.

Luca gets a lucky break. Natasha had to throw away her second Pana Cotta when her plan failed to get the same results. When it came time to judging, the judges love Natasha’s dessert but they wish there was more on the plate like she had originally planned.
Luca’s dish is great. He was able to pull off a tomato jam and they love that he tried something never before seen. Just one little problem. The way Luca arranged the dish. He could have made sure every bite had the same taste and consistency.

It’s a hard decision. Who will win with both chefs creating such wonderful dishes? It’s a tough choice but the judges choose Luca. His technicality and level of difficulty far surpassed that of Natasha. Still, never count on Natasha being down for long. Her ambition will see her through no matter what happened tonight.