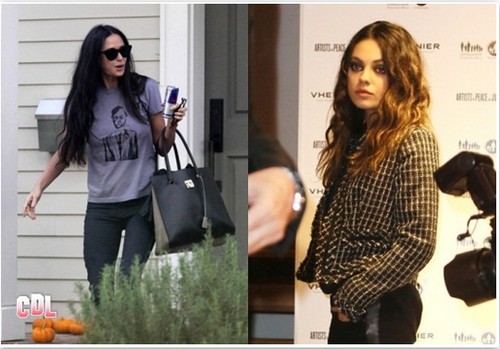 I guess Mila Kunis is really tired of Demi Moore’s drama being smack in the middle of her relationship with Ashton Kutcher. His chronically insecure ex has certainly made it difficult every step of the way for Mila and the actress believes it’s time to at least attempt to bury the hatchet once and for all. Mila believes that Demi’s mission to make her life with Ashton difficult is rooted in the notion that she was a third wheel in Demi and Ashton’s troubled marriage. Supposedly Demi believes that Ashton and Mila were hooking up long before they split and that is the main reason why she has refused to let Ashton have a divorce.

According to Mila she was never stuck in any sort of triangle with the couple and she’s thinking that maybe a meeting with Demi to clear the air will work. She wants to put all of the rumors and innuendos to rest once and for all. My guess is that Mila probably thinks that if she can convince Demi that nothing was going on then maybe Demi will finally, willingly let Ashton go.

What Mila is forgetting is how insecure Demi is and how her worst fear was that Ashton would ultimately leave her for a younger, hotter woman with a flourishing career and tah-dah! Along came Mila! Even if Demi believes her she’s still going to feel slighted by Mila and resent the fact that the smokin’ hot actress has her man! Demi will eventually have to let Ashton go but that doesn’t mean that she’ll help the process one bit by cooperating.

Do you think Mila has the right idea in wanting to have a face to face chat with Demi? Will it do any good or just add to Demi’s inferiority complex? Tell us your thoughts in the comments below!