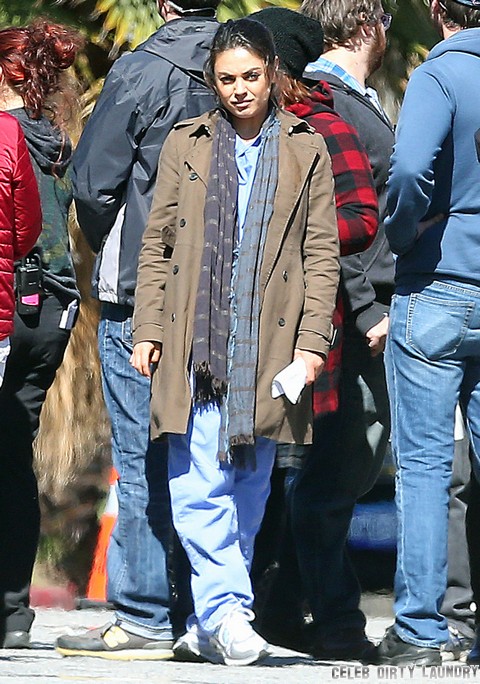 Mila Kunis often tops Hollywood’s sexiest lists, but the actress is looking to shift her image. She’s in an oh-so-serious relationship with former costar Ashton Kutcher, and friends say they’re on track and planning a future together. Mila has had no qualms with a little tasteful nudity before, but now she’s putting her foot down—fans will be seeing a lot less skin!

In what seems to be an illogical explanation, Mila reasons that if in a movie she “showed side boob,” she doesn’t “need to show ass” because fans “get one or the other.” Does it really matter that much? Butt shots are generally agreed to be the most innocuous of nude scenes, and side boob is an often-unavoidable side effect of strappy tops. Mila’s new rule doesn’t seem to have any logic. I mean, couldn’t diehard fans just watch her entire body of work, or creepily piece together clips of her skin scenes?

I think that Mila’s new rules are probably informed by slightly overbearing boyfriend Ashton! He’s gotten around quite a bit, to say the least, and we’re sure he knows all tricks to pry a woman from her relationship! The two seem to be totally at ease together, but that won’t keep him from getting jealous when he sees her get hot and heavy onscreen with a rival actor! But it’s all part of the industry—and unless your Kristen Stewart or Brad Pitt, on-set lust rarely turns into anything.

Of course, Mila’s logic could be rooted in a new sense of self-respect, one that tells her nudity isn’t essential to great acting. Could Mila be trying to revamp her career and become a serious actress? Or is she trying to please her boyfriend? This seems like a very sudden and arbitrary change, and we can’t make heads or tails of it! Why do you think Mila is putting her foot down when it comes to on-screen nudity?