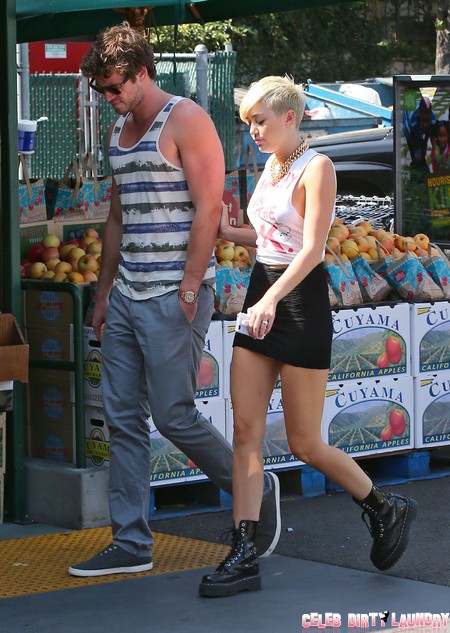 Miley Cyrus insists that she’s still engaged to Liam Hemsworth. Is she telling the truth or is she just delusional? Look, we’ve covered the Miley/Liam situation extensively at CDL. The timeline of what exactly went down in their relationship is sketchy at best, but Liam and January Jones hooked up during awards season. Were Miley and Liam together at the time? She says yes, sources say no.

Anyway, that continued into a long ‘are they together or aren’t they’ period for the couple, with sources close to Liam conveniently ‘leaking’ reports about how his family wants to hold an intervention to get him to breakup with Miley, and how her ‘wild’ ways are not suiting him. Obviously, all this was damage control from his team over the whole January Jones cheating debacle.

Meanwhile, Miley kept her ring on, posed with wedding dresses on her Twitter, and continued to insist that everything was just fine in her relationship to Liam. While his team sent out the reports about them breaking up for good, Miley’s team would send out reports about how they were still ‘working’ on their relationship.

Why Miley continues to insist that their relationship is fine when Liam is turning out to be such a douchebag, I’m not really sure. Young love is blinding, as they say. Throughout this entire saga, it was pretty clear that he was throwing her under the bus because he didn’t want his image ruined, and she just wouldn’t let go. Even now, after he stays out of the spotlight and doesn’t say anything, she keeps talking about how she’s STILL engaged.

I mean, there’s no ambiguity about it. She was asked about rumors of her dating Justin Bieber, and he response was a straight up, “I’M ENGAGED. I’m engaged. It’s impossible.”

What do you guys think? Is Liam playing games, telling her that everything is fine and presenting another face in public? Or is Miley just in denial? Let us know what you think in the comments.