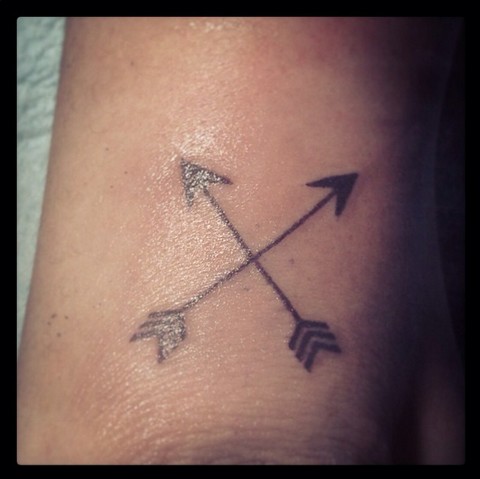 First the marriage proposal and now the entire image change – those are the first two signs that this has been named Miley Cyrus is trying everything she can to keep her fans entertained and buying her music. In her latest move to have everyone thinking “Oh my god, Miley why are you doing that?” – the 20-year old decided to get another pointless tattoo — this time it was two arrows on her elbow – a friendship symbol.

The tattoo was done by Kat Von D,- she seems to have become the go-to person for crap tattoos, but Miley seems to love her work so much — or does she really? It was probably just another move to get some kind of attention from the paparazzi in Hollywood, don’t you think?! She hasn’t got anything else going on so what better way to try and keep yourself relevant by getting a pointless tattoo that you didn’t even want but got it anyway so people know you still exist in this place we call earth.

Last week, we spotted Hannah Montana in Costa Rica doing her yoga routine nearly naked (her butt cheeks were hanging out as she bent over at least five times) on the beach.. and it just so happens that a lot of celebrities get photographed at this particular beach. We can not help but think in our heads that she just wants to be noticed by the photographers — clearly no one cares about her anymore after that terrible album Can’t Be Tamed was released.

Her third studio album, released in 2010, has only sold 315,000 copies in the United States to date and 1.5 million copies worldwide, making it her worst record to date.  And those numbers are still way more than the album deserves.

We don’t know what’s funnier; the fact that she has a flat butt or how bad the new tattoo is. Surely she could have gone to anyone to have that done… but no!.. Miley has to go to Kat Von D, in hopes that anyone would care about what she’s up to. We all know she’s not going to marry Liam Hemsworth, it’s just a cover up because she really is a–  well, we shall let her say it herself. We don’t want to be known for putting words in people’s mouths.

Don’t say we didn’t tell ya so! If this next album she’s currently working on with Pharrell flops… she’ll make the announcement for sure. Mark our words.