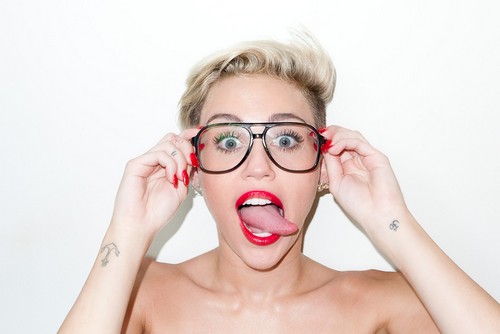 Guess you know by now that Miley Cyrus is hosting SNL and all I got to say is that FCC should prepare themselves from the multitude of complaints that will coming their way. Will it be a tongue thing? I don’t thinks but I’m pretty sure her outfit will right in any strip club in America. Her outfits are that sleazy and in no way can they can be at least considered to be artistic like Lady Gaga’s.

I’m practically psychic the way I can see all of this playing out. Here’s what you’ll witness a scantily clad Miley trying so pathetically to be sexy that she ends up looking anything but. She will sing some great music and her sketches will be funny. However I can guarantee there will be a sketch that pokes fun at her. If she takes it well then all is goo and if not then we can look forward to another interview on how she’ll “never” do crap like that again. This time she means the show and not her performance.

When all is said and done she will in know way calm the hell down with proving she’s now legal. Why? Because in many ways she is just not that smart. She’s simply a girl bent on self-destruction. Don’t worry she’s not our problem. Leave it to Sinead O’Connor to interfere.

Don’t forget to return to read our live recap and see our videos of the show as they are released!

When I had mentioned Miley earlier I had also brought up the FCC. It was my hope that they would stop her but I had forgotten something. The damn government shut down several days ago. Of course there wouldn’t be anyone reigning the queen of nudity in.

Luckily Miley was open to making fun of herself while remaining clothed. She appeared to be showing much maturity as well. Wasn’t sure that how that will work for a comedy sketch show yet she pulled it so far. Which leads me to wonder what is going on? Did someone talk to her about the things she’s been doing. Sure the tongue still came out but again in a way of poking fun.

Just as I realized I couldn’t say “Oh sorry spoke too soon” a little part of me began to hope. I should mention it was Miley’s take on Michelle Bachman. She was in short shorts grinding on any available surface. It wasn’t as bad as her usual routine but it was there and I can stop feeling bad for knowing it was going to be there the entire time. I had almost suspected I wouldn’t see anyone’s butt cheeks. Boy was I wrong. In a good way though.

Overall this was Miley breaking into adult. A bit overdue and yet most welcomed. Maybe if she keeps this up people can begin to pay attention to her music again. I had time tonight to like her songs. Generally her behavior always turned me off from listening to them. This time they didn’t. Keep it up Miley. This what we call aging with grace.

There’s still some tarnish there and it’s going to remain there but now I can like it.