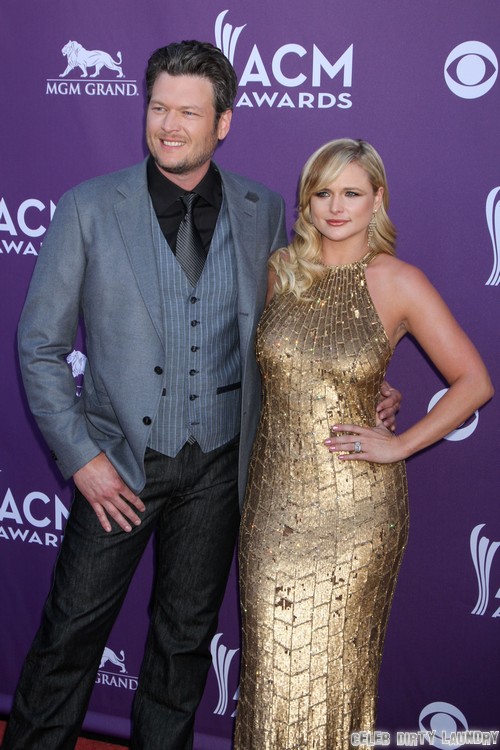 Miranda Lambert and Blake Shelton have been in the tabloids a lot lately, largely due to their supposedly crumbling marriage. I think that by now, it’s pretty much an open secret that Blake Shelton can’t keep it in his pants, or it’s at least what all the tabloids want us to believe.

However, a new report from Star Magazine is not blaming the infidelities or rumored cheating, but alcohol. A source close to Miranda and Blake has reportedly told Star that the couple is ‘drinking their marriage away’.

The source explains, “Though partying is something Miranda and Blake bond over, friends say it’s only served to amplify Miranda’s jealousy and Blake’s uncontrollable flirting — leading to a vicious cycle of drinking, fighting and drinking more as a means to cope.” The source also adds, “Alcohol is the root of 90 percent of their problems. Blake likes to provoke Miranda when he’s drunk — he talks constantly about other women he thinks are sexy.”

You know, it’s a wonder Blake and Miranda have stayed together this long if all the tabloid reports about them are true. However, I am very much a believer in the phrase ‘there’s no smoke without fire’. In the case of Miranda Lambert and Blake Shelton, I think there is definitely fire, but whether that’s alcohol, cheating, fighting – we can’t really know for sure.

What do you guys think about Miranda Lambert and Blake Shelton’s marriage? Do you think that it’s being caused by their drinking, or do you think that something else is the root of the problems? Do you even believe that they’re having issues, or do you think the tabloids are blowing everything out of proportion? Let us know in the comments.