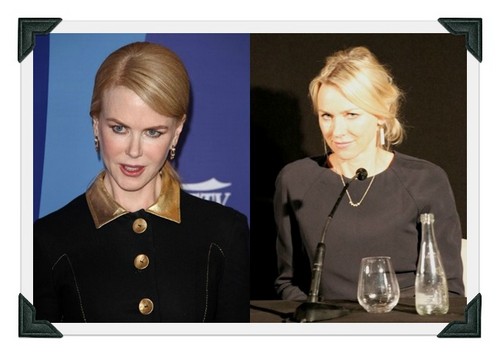 I guess we really shouldn’t be too surprised – after all what is bigger than a celebrity ego? Rumor has it that Nicole Kidman and Naomi Watts are the newest celebrities to join the list of celebrity feuds.  There is nothing more fun that watching two celebrities fighting it out over egos, so let the games begin…

So this is how it all went down, both Nicole and Naomi are playing princesses in new biopics.  Nicole is playing Grace Kelly in Grace of Monaco and Naomi is playing Princess Diana.  The two ladies are not thrilled about the competition, it seems the world is not big enough for two princess movies.

The Aussie Posse is no more!  Nicole and Naomi have famously been best friends for decades, but “this year has been seriously tough on the friendship” an insider tells Star. The trouble began when Nicole refused to appear on a 60 Minutes special about Naomi’s Academy Award nomination, leaving Naomi, “Deeply hurt” says the source.  Then they are both playing princess in biopics. Advance reviews for the moves — both of which are set for November releases before Grace was bumped to 2014 — declared Nicole’s film the winner. “Nicole is definitely gloating, while Naomi is stewing,” says the insider.  “The former besties are quickly drifting apart.”

Celebrities would love us to believe that Hollywood is not all about cutthroats and that some celebs can actually establish genuine friendships but I don’t buy it.  When the egos walk in friendships walk out!

So what say you CDLers, which movie are you tuning in to.  Nicole’s Grace, Naomi’s Diana or neither.  Kick it out to us below!