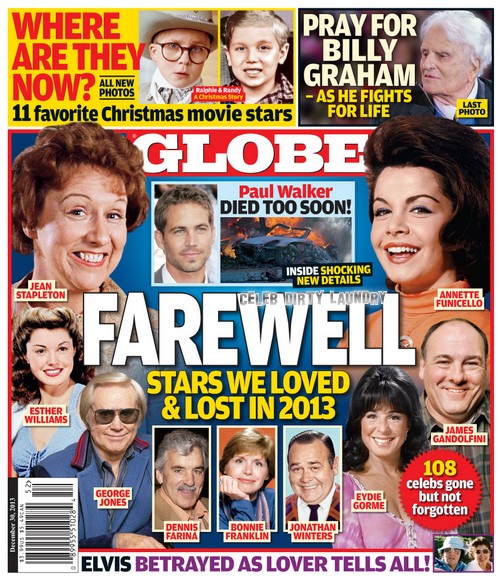 As every year winds down it’s almost inevitable that we’ll take a look back at all that transpired, right? Tis the season of best and worst lists and a reminder of what was hot and what fizzled seconds after it hit. It’s also a time for Hollywood to reflect on the big names that it had to say farewell to and the Dec. 30th print edition of GLOBEMagazine is ready to do just that.

America’s favorite mermaid, Esther Williams finally left us and we also had to say goodbye to the talent of such memorable actresses as Jeane Stapleton and Annette Funicello. There were also several surprises. I for one loved Dennis Farina. He found fame in gunslinger films but then grabbed the attention of a younger audience when he spent a few season busting perps on NBC’s Law & Order. James Gandolfini is another that shocked Hollywood and its’ fans alike. No one wanted to believe that this guys life really ended while vacationing in Italy. He really found his groove on The Sopranos but I think if Gandolfini had lived longer his best work was yet to come.

Of course we need to mention the recent death of Paul Walker, ironically in a fiery car crash. His autopsy results were just released and they prove that impact alone didn’t kill the actor, but being trapped in the engulfed vehicle also contributed. He was working on the 7th installment of Fast & Furious and fans of the franchise at least can look forward to seeing him onscreen again one last time.

Billy Graham needs our prayers according to GLOBE. The man who has prayed for many millions is fighting for life now and GLOBE has all the sad details.

To end on a happier note, it’s also the season for holiday films, right? It’s that time of year where we all tend to roll out the same movies, but have you ever wondered what happened to the stars of those films? Well if so you’re in luck because the Dec. 30th print edition of GLOBE Magazine has rounded up a list of your favorites so that you can catch up with what they’re up to now! Grab the latest copy to get the scoop, but in the meantime what’s your favorite Christmas movie? Tell us in the comments below!